Cosmos (ATOM) shows signs of bullish reversal – What do other indicators show?

Cosmos (ATOM) shows signs of bullish reversal – What do other indicators show?

Cosmos (ATOM) has largely outperformed the entire crypto market. The coin did however come under serious selling pressure over the last few days. However, it seems from chart readings that signs of a bullish reversal are there. But what do other indicators say about ATOM? Here are some highlights: 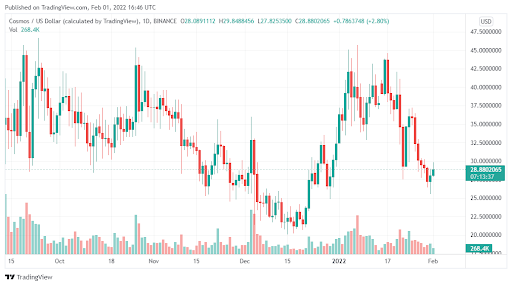 Can ATOM Surge in the coming days?

Well, for most coins, there is always a point of price consolidation before any rally. This is the case with ATOM over the last few days. However, the coin is still way lower from its 20-day simple moving average of around $37. It is however slightly off its 100-day SMA.

With this in mind, it is clear that the coin is still in the bear market territory. If indeed there is going to be a decent surge upwards, then ATOM must consolidate above $33 and retest the 20-day SMA in the near term. Although we are seeing some signs of upward movement, the coin has not surged fast enough to get to $33 anytime soon.

Should you buy Cosmos (ATOM)

ATOM is one of the most interesting and perhaps even the most promising blockchain projects right now. It has a huge base of trusted investors and gets very good press in the media as well.

If you were to put together a list of the top 5 blockchains to watch, Cosmos will be among them. It is based on this that its native token, the ATOM is a very decent buy, especially for the long term.