The price of LUNA is in danger of falling lower, but experts predict a comeback when the cryptocurrency challenges a stable multi-month trend line for security. According to an analytical assessment given by experts, Terra (LUNA) might fall to around $25 per token in the following weeks as a head-and-shoulders (H&S) arrangement develops, signaling a 50% price decline.

When the price produces three peaks in succession, the middle peak (referred to as the “head”) is higher than the other two (left and right shoulders). The “neckline” is a standard price floor that connects all three peaks.

When the market falls below the H&S neckline, traders usually try to begin a short position. Before launching a short position, some traders use a “two-day” rule, in which they wait for the second breakout verification when the price retests the neckline from the downward as resistance. 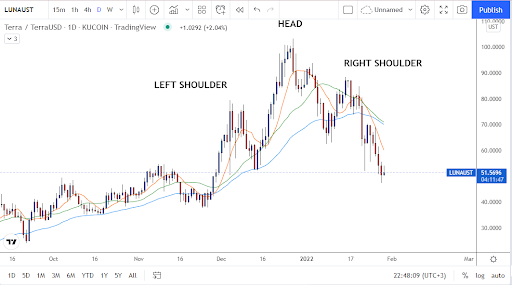 Conversely, traders should aim for a short objective with the same length as the highest range between the head and the neckline. As illustrated in the chart, the price of LUNA is now moving toward the same H&S short target, which is now approaching $25.

LUNA’s downtrends have often come to an end when it challenges its 50-week simple moving average as support throughout its brief existence as a financial asset. At the time of publication, the price floor was about $30.

However, LUNA has probed its 200-day average range (200-day EMA) for a possible comeback on the daily timeframe chart. If that happens, LUNA’s next upside objective, as seen in the chart above, seems to be approaching $75.

A definitive move below the 200-day EMA wave, on the other hand, might kick off the H&S setup toward $25.