After a massive blood bath for most parts of January. Sandbox (SAND) is starting to crawl back some of those losses. In the last three trading sessions, the token has closed in the green, suggesting that perhaps a trend reversal is playing out. But despite this, you should be cautiously optimistic and we will tell you why. First, some highlights: 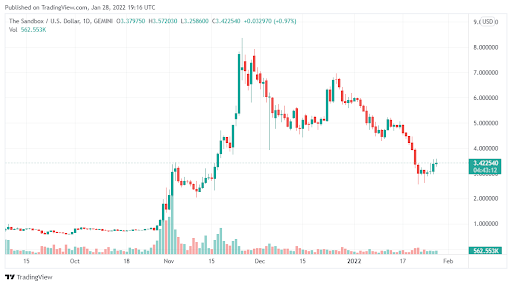 The last three days have brought renewed optimism among Sandbox (SAND) investors that perhaps the token is about to reverse its downward trend. While this is somewhat true, there are still some important indicators that suggest the token is still not out of the woods yet.

For example, even with the rally the past three days, Sandbox (SAND) is still below the 100- and 50-day moving average, suggesting a bearish outlook in the near term. The RSI readings also suggest that there is still a lot of room for selling pressure.

In a nutshell, the three-day rally seems more like a dead cat bounce. While it’s still a good thing, we expect Sandbox (SAND) to snap back to its downtrend at least in the near term.

Should you buy Sandbox (SAND)

Well, it depends if you want some exposure to metaverse tokens. Based on current crypto trends, there is no doubt these tokens will be big in the future. But if I were you, I would wait for the correction on Sandbox (SAND) to end. That way, you don’t hold downside risk, and you also get in on a discounted price.