As sentiment in crypto remains fearful, many investors are holding back from making any new acquisitions. But there are some assets in the market that are offering the incentive to buy. Basic Attention Token (BAT) is one of them. Based on recent price action, the token appears to be in the prime buying zone right now. But should you swoop in? Well, analysis to follow below but first, some notable highlights: 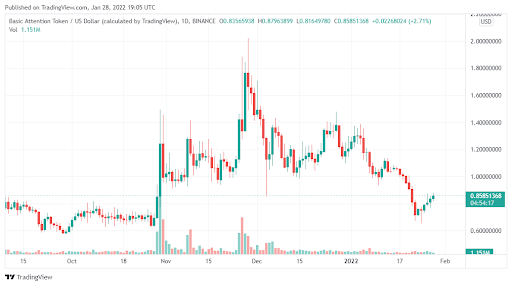 After tanking by nearly 60% from its all-time highs in 2021, it looks like there is some semblance of recovery by BAT. The token has seen some consistent rise in the last four days albeit they have been modest.

However, BAT is still trading below the 25- and 50-day moving averages, suggesting that the downward trend is probably not reversing.

If indeed bulls are not able to push the price action further, selling pressure could push it down towards the next support of $0.645. But if BAT is strong enough to cross the $1 mark, then we may see increased bullish momentum in the coming days.

Why you should buy Basic Attention Token (BAT)

But as more users continue to raise privacy concerns with traditional browsers, then it is likely that Brave will be a big asset. In that case, if you want to invest in BAT long-term, this is the right time to do it.