Axie Infinity (AXS) Continues to meltdown – Should you buy it?

Axie Infinity (AXS) Continues to meltdown – Should you buy it?

Metaverse and gaming tokens haven’t had the smoothest of rides in the market over the last few weeks. Axie Infinity (AXS) is not any different in fact, the token has been seeing an unhinged meltdown that has sent the price crashing. But should you buy this dip? Can AXS rebound soon? Here are some highlights first: 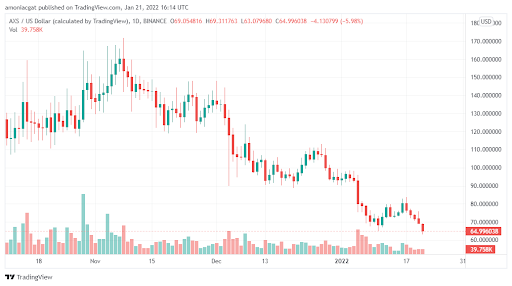 Looking at the chart and some technical indicators, it is clear that AXS has been trading on a downward trend for quite some weeks. It did not start with the crypto slump of the new year. At the moment, the token has slid past its 25- and 50-day moving averages.

More importantly, the price dropped below a crucial support level of $66. If the price action does not bounce back and hold above this threshold, then increased downward pressure will send AXS towards its next support, which is $50.

However, this thesis will be invalidated if there is enough bull support above $66. If that happens, AXS could retrace gains back to its next upward support of $75.

Should you buy Axie Infinity (AXS)

The metaverse and blockchain gaming is an emerging new sector that is heating up. Axie Infinity (AXS) was one of the first pioneers of this industry, but there is increased competition. If you want some exposure to this sector, then it is a good buy. But as the blockchain gaming sector heats up, AXS will face significant pressure due to competition.