The crypto market has typically attracted a lot of new innovations. But there are also some tokens that are simply launched for that feel-good factor and not really based on any intrinsic value. Football tokens are in that category. They are basically designed to be part of the loyalty and passionate fanbase we know in football. Nonetheless, here are some facts about football tokens:

Well, in case you are thinking of grabbing yourself some fan tokens, here are a few options to consider by market cap:

The Paris Saint-Germain Fan Token (PSG) is a fan token for the supporters of one of the biggest clubs in France. The coin is available for trading in all major exchanges around the world. 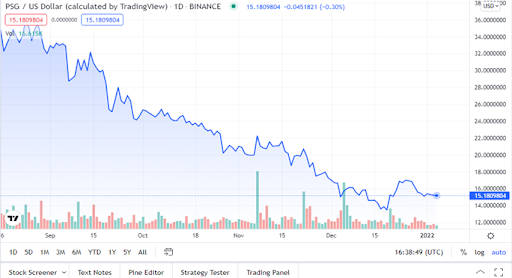 At the time of writing, it was selling at around $15.23 with a market cap of $48 million. It is also the largest fan token by market cap right now but still falls way low in the overall crypto market, ranking 622.

Lazio is one of two big clubs based in the Italian capital of Rome. Its fan token is surprisingly valuable, seeing that the club is not really one of the biggest in the world. Nonetheless, the S.S Lazio Fan Token (LAZIO) is currently trading at around $4.57, down 13% over the last 7 days. The coin has a market cap of around $40 million.

You don’t have to be a fan of these clubs to buy these tokens. But since they don’t have a lot of intrinsic value, they can be highly risky.