In mid-November, Litecoin (LTC) was hit by a minor correction against the US dollar. It appears at the time that a short-term downtrend was well on course. And then came the crypto winter, where bearish sentiment in the wider market took hold. As a result, LTC was in for a route, plummeting to nearly $140 from its October and early November highs of $296. However, some bullish RSI divergence suggests an upward rally is not far away. Here are some facts: 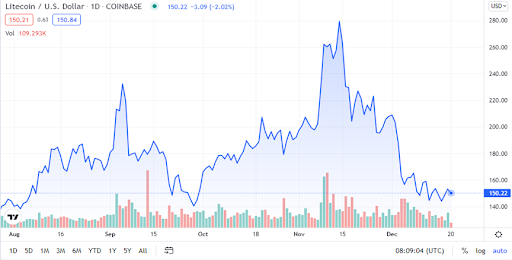 It’s been a bitter-sweet rollercoaster for Litecoin over the past three months or so. After hitting highs of $296 in late October, the coin has just nosedived. At one point, it plummeted 51% to hover around its $141 support. We have not really seen any rally ever since.

At the time of reporting, LTC was trading at $151. But there is some hope. In recent days, the price action has been swinging in between the $141 support and $166. This suggests that LTC is undergoing some price consolidation, something that makes it a prime target for a bullish breakout.

Should you buy Litecoin (LTC) today?

In general, the entire crypto market is down. This gives investors the perfect opportunity to buy undervalued assets and hopes to ride a bullish wave in the near term. But there is still some downside risk this year, especially if headwinds in the market don’t abate. But LTC is always a good long-term investment, and since it’s trading at a discount, this is the perfect time to get in.