Over the last few months, Algorand (ALGO) has accelerated the development of its DeFi ecosystem in a bid to maintain growth momentum. The self-sustaining and highly scalable layer-one blockchain in fact launched the Algorand Virtual Machine a few weeks ago that provides support for DAapps. The move now allows DeFi and NFTs to launch and operate on the network. As a result, experts see wider adoption of the blockchain in 2022. Despite this, the price action as of now is looking uncertain. Here are some notable points: 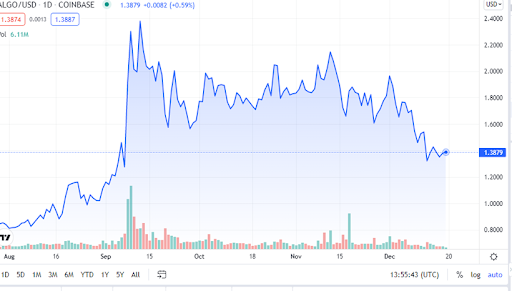 Although the future looks relatively bright for Algorand (ALGO), in recent weeks price action has remained quite depressing. At the time of writing this post, the coin was trading at $1.39. This suggests that the bear trend is well and truly in force.

But the question is, can ALGO break into $1.54. Analysts believe that this will mark a significant reversal in the downtrend, something that could trigger a breakout momentum that ultimately pushes ALGO to $1.63 or thereabout. But with market-wide pressures likely to emerge before the year is out, a lot of downside risk still remains.

Should You Buy Algorand (ALGO)

For long-term plays, there is no doubt Algorand (ALGO) is a good buy. In 2022 in particular, the coin is poised to see immense growth due to increased investments in its DeFi ecosystem. But for the time being, the price action is still uninspiring, and it would be best to wait at least until after Christmas.