The broader trend in crypto over the last few weeks has been somewhat bearish. Just like most other coins, Arweave (AR) dipped below its support level of $36.25. This came after the coin had hit an all-time high this year of nearly $91. While we don’t see these highs returning soon, technical analysis shows that a bullish breakout trend could send it close to well over $60. Here is why: 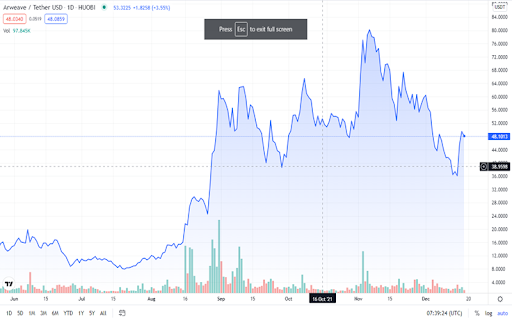 Arweave (AR) – What is it and Pricing Analysis

Arweave (AR) is the native token for the Arweave platform, a blockchain-based data storage protocol that provides the permanent long-term storage of digital assets, including smart contracts, NFTs, traditional media, and so much more. Just this year, AR grew to reach its all-time high, but a broader sell-off in crypto has seen the value tumble in recent weeks. Also, this appears to be a much-anticipated correction after the $90 highs.

However, we still think that the coin needs to break into $50 for a proper bull trend to catch on. If indeed, it doesn’t do this in the near term, it could suggest that the correction is still in force, something that could lead to massive volatility.

Should You Buy Arweave (AR)?

From a long-term point of view, AR is a decent investment for crypto investors. The long-term value and the supporting fundamentals are very positive.

AR is however a very risky option for speculative short-term trades. Unless we are sure the current correction won’t slide further, it’s best to look at AR as a long asset.