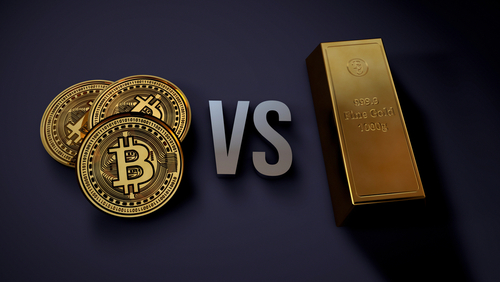 Microstrategy CEO Michael Saylor says in the end, the battle between Bitcoin and gold will be decided in digital gold’s favour.

In an interview with CNBC’s ‘Squawk Box’, Saylor noted that Bitcoin’s growth is set to see it become a $100 trillion asset class, with the 100x increase in its market capitalisation setting it ahead of traditional store of value gold.

Microstrategy is one of the mainstream companies that hold a significant share of Bitcoin since making its first purchase in 2020. The company is set to add to its current haul of 114,042 BTC, Saylor revealed during the interview.

According to him, the strategy is to “keeps stacking forever”, which implies buy more BTC whenever the opportunity to do so appears. He said that the next ten years will see the flagship cryptocurrency explode amid massive investor adoption, even as monetary indexes across the globe collapse.

A figure that is quickly becoming a respected voice in the Bitcoin community, Saylor believes BTC is on the path to toppling gold.

He added that the trajectory that the cryptocurrency is on will continue in the digital gold’s favour, with the precious metal set to be overtaken this decade.

This, he said, will happen despite the potential for regulatory headwinds. He points to some countries banning crypto or instituting regulations that limit investors.

In his view, there is no other asset class that would beat Bitcoin if an institution wants a safe haven asset. It is Bitcoin that offers the “ethical, technical, and legal safe haven” status that institutional investors want, he added.

Saylor also says the next ten years could see Bitcoin make up 5% to 7% of the global economy. In this time, the US dollar could have replaced most of the world’s national currencies, with the euro and the Chinese Yuan the only other global currencies.