The BTC/USD pair has traded at lows near the key support of $46,300, with the technical outlook suggesting further losses

The benchmark cryptocurrency is trading around $47,100 at time of writing, about 2% and 4.8% down in the past 24 hours and week respectively. BTC/USD might continue to face short-term bearish pressure after this latest rejection, with negative sentiment likely to increase as market dominance slips towards 40%.

In the case that fresh selling occurs, Bitcoin could slip towards the $45,000 support level. If the price falls below $45,000, it could tank to $40,000, according to price projections shared by a technical analyst.

Bitcoin’s downward move follows the price movement towards the apex of a bearish triangle pattern formed on the daily chart. The decline below the triangle’s support line has added downside pressure, with the failure to clear the $49,000 resistance zone over the weekend seeing BTC/USD move to lows of $46,700. 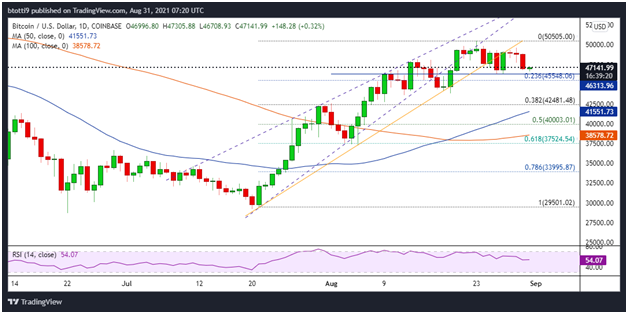 Although the cryptocurrency’s price remains in an overall uptrend, bears look poised to retest the key support level at $46,300. This move would open BTC/USD up to a potential slip towards the next anchor around the 0.236 Fibonacci retracement level of the swing high from $29,501 to $50,505, currently located at $45,548.

These lows coincide with predictions made by technical analyst Kevin Wadsworth. In a recent interview with Kitco News, the co-founder of Northstar and Badcharts opined that although Bitcoin remained relatively bullish, it could seek support at the $40,000 level before rebounding to hit a new high.

In the short term, bulls must defend the $46,300 line to retain the advantage suggested by the daily RSI above 50.

According to Wadsworth, BTC/USD might see fresh buying pressure if the price breaks above $51,000, with a new rally likely to see prices peak from around late September to October.  If the scenario plays out, the analyst predicts that BTC price could hit $100,000 before the end of the year.