One analyst is predicting the next resistance could be around $55k, with a possible breakout if BTC price achieves a daily close above $49,170

Bitcoin price has surged above $50,000 in Monday morning deals as bulls target further upside that could see the benchmark cryptocurrency reach the highest daily close since 11 May.

The leading cryptocurrency by market cap has added about 2.2% to its value in the past 24 hours, edging to intraday highs of $50,505 on major US exchange Coinbase. Overall, data on CoinGecko shows the BTC/USD pair has nudged to highs of $50,270 on most major exchanges.

At time of writing, the flagship cryptocurrency is trading around $50,252 on major global exchanges. The current price level means Bitcoin’s value has jumped nearly 7% this past week, and over 50% since 23 July.

Today’s upward action comes on the back of positive news from online payments giant PayPal, which has announced an expansion of its crypto services. According to the company, users in the UK can now buy, store or transfer top cryptocurrencies directly from their PayPal accounts.

Today, we are announcing the launch of a new service that will enable eligible customers in the UK to buy, hold and sell #Cryptocurrency directly from their PayPal account. Terms apply. pic.twitter.com/RG5xoqlHmr

The service had initially only been available to the firm’s US customers, with the expansion set to make it even easier for more people to use Bitcoin (BTC), Ethereum (ETH), Litecoin (LTC) and Bitcoin Cash (BCH). 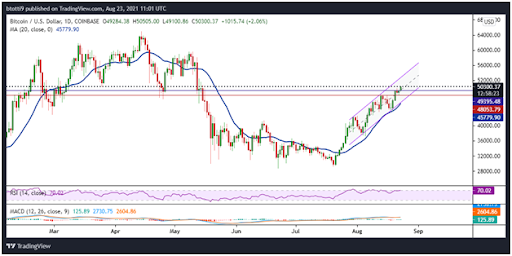 According to one analyst, BTC price is likely to extend to the next resistance zone around $55,000. This outlook is supported by the RSI lodged above 60 and the MACD that remains within the positive zone and is beginning to rise after a bullish crossover.

As long as the $49,170 demand barrier holds, #BTC might be able to advance further. pic.twitter.com/Ce3vQuLXC3

Another analyst has identified the next resistance zone as being in the $52,000 to $60,000 region. While bulls might test the upper ranges, the analyst warns that the region is likely to provide a correction.

As we approach key resistance between 52-60k, it is time to be cautious. While it’s possible we break through, this region is the MOST LIKELY place to see a correction if we are going to get one. Also, funding has flipped positive for the 1st time since our 28k bottom. $BTC https://t.co/LnBHTT5Fcy pic.twitter.com/Po3Rg15hYa