Ripple (XRP) price has jumped 11% against the US dollar in the past 24 hours, and 5% against Bitcoin (BTC) to continue its smooth recovery following recent losses.

As the crypto market witnesses major spikes for Cardano (ADA) and impressive upsides for Bitcoin and Ethereum (ETH), XRP has quietly increased nearly 30% this past week to see it come close to a weekly top.

The cryptocurrency is also over 135% in the green over the past 30 days, while its 330% up from its value a year ago.

XRP has traded higher since breaking above the resistance line of a rising channel near $1.02, a hurdle marked by the 61.8% Fibonacci retracement level of the move from $0.50 to $1.35.

The uptrend, however, reached headwinds around $1.35 as shown on the daily chart below, with the downturn then seeing a textbook bounce off the new support line at $1.10. 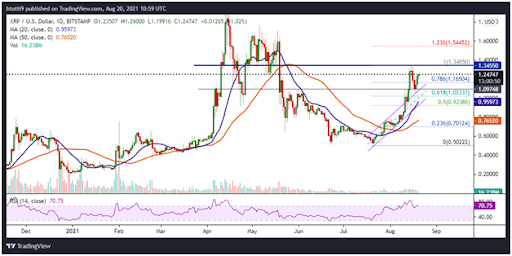 XRP/USD is seeking a third consecutive higher daily close. If price continues on this trajectory, the week could end with bulls managing the highest daily close since mid-May. To achieve this, buyers need to move XRP above $1.28 and seek to consolidate gains near its weekly highs marked by the horizontal line (blue).

Looking at the chart, we see that the daily RSI has started to climb into the overbought territory, suggesting a growing bullish momentum. The moving average curves are also upturned after a positive crossover to add to the bullish outlook.

If price moves above the line, demand could push it to the next major hurdle at the 123.6% Fibonacci extension level ($1.54).