The cryptocurrency market’s correction continues, with Tron and other major cryptocurrencies all recording losses recently

The cryptocurrency market has been in correction mode since the start of the week. Bitcoin touched $47,000 during the weekend but has been trading in the red zone since, and it is now below the $45,000 mark.

Ether closed in on the $3,300 level during the weekend but has been trading just above $3,000 over the past few days. Thanks to the losses recorded across the board, the total cryptocurrency market cap now stands close to $1.9 trillion.

Tron is currently down by 2.5% over the past 24 hours, losing its support level above $0.085000 yesterday. The bulls have been able to defend Tron’s major support level, but it is unclear if they can continue to do so if the current bearish sentiment in the market grows.

The general cryptocurrency market is in the red zone, and it is not surprising that the TRX/USDT 4-hour chart is bearish. With the market currently in correction mode, further losses could be recorded over the next few hours.

TRX has been able to defend the major support level above $0.08136. However, if the bearish trend continues, it could fall below this level. Unless there is an extended market sell-off, TRX should steer clear of the second major support at $0.07773. The 23.6% Fib level at $0.07870 should also provide adequate support for the cryptocurrency in the coming hours. 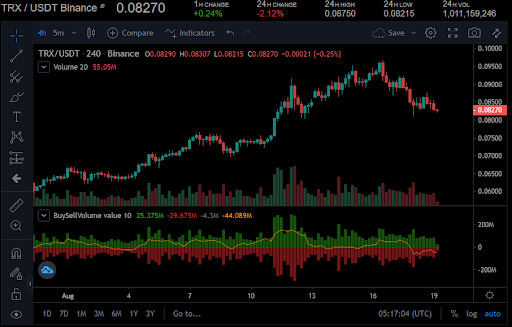 On the other hand, if the market rally resumes, TRX would need to climb past the $0.08464 pivot if it stands to make a run at the first major resistance level at $0.08827. Surpassing this level would require help from the broader cryptocurrency market.