BTC price reached a 24-hour low of $43,965, briefly breaking below a major support line provided by the 100 simple moving average on the 4-hour chart. The major cryptocurrency had seen its price slip from a 24-hour high of $45,923, with the general sell-off putting pressure on bulls as they battled to keep an overall bullish outlook intact.

As seen on the chart below, BTC/USD failed to rally above the trendline support, a level below which prices have broken since the downturn from highs of $46,000. The breakdown has now turned the crucial ascending trendline into a new resistance zone.

Bulls are bidding to test the barrier again after an earlier rejection resulted in the decline below $44,000. Although overall sentiment is heavily negative, a successful breakout above $44,500 could see buyers seek a decent bounce above $45,000. If BTC remains well bid here, bulls will target fresh support around the $46,000 mark and probably look to test the weekly high of $47,862. 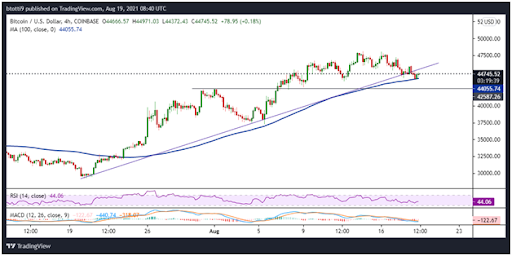 Technical indicators, however, suggest Bitcoin might yet see a short term bearish flip. The 4-hour Relative Strength Index (RSI) is trending below the 50 mark and the Moving Average Convergence Divergence (MACD) is in the negative zone after a bearish crossover.

If Bitcoin drops towards lows of $44,000 again, a successful break below the 100 SMA ($44,052) could call for increased sell-side pressure. In this case, BTC/USD will risk further losses to the horizontal line around $42,600. If this happens, there’s a high chance of an extended dip towards $40,000.

At time of writing, Bitcoin price is trading around $44,770, less than 1% down on its 24-hour opening price but 2.3% in the red on its weekly open. Despite these losses, Bitcoin price is more than 40% in the green this past month and over 270% in profit in the past year.