The cryptocurrency market recorded losses for the second consecutive day this week, with prices of most coins down by more than 2% in the past 24 hours

The cryptocurrency market rallied for most of last week, with Bitcoin rising past $47,000 for the first time since May. Ether also experienced a massive increase in price, closing in on the $3,300 mark last week.

However, the market is currently in a correction period, with the prices of most cryptocurrencies down by more than 2% in the past 24 hours. Bitcoin has dropped below the $45,000 mark while Ether risks falling below the $3,000 resistance point in the coming hours.

Safemoon isn’t left out, with the cryptocurrency losing nearly 5% of its value in the past 24 hours. The market is consolidating after last week’s rally, and this implies that SAFEMOON and other cryptocurrencies could experience further losses over the coming hours and days.

The broader cryptocurrency market is in a bearish mode at the moment. Hence, it is not surprising that the SAFEMOON/USDT 4-hour chart is in the red. SAFEMOON is down by roughly 5% in the past 24 hours and could drop lower over the coming hours. SAFEMOON is currently trading at $0.000001545 per coin.

If the current bearish trend in the broader market continues, SAFEMOON could lose more ground and drop below the $0.00000130 level. The negative performance could see SAFEMOON lose one more decimal point and trade around the $0.00000090 region over the coming hours and days. However, SAFEMOON doesn’t risk losing that much unless there is an extensive market sell-off. 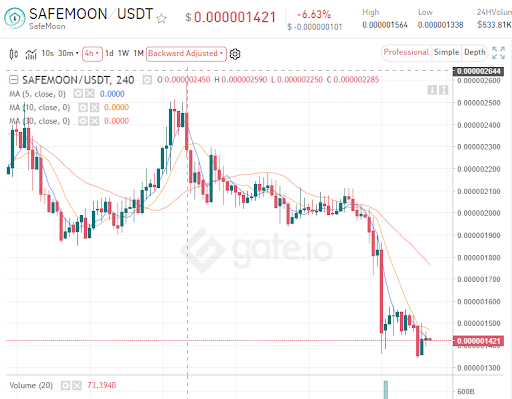 On the other hand, if bullish sentiment returns, SAFEMOON could surpass $0.00000165. The first major resistance is around the $0.00000174 region, and SAFEMOON could make a run for it if the market rally continues.

Unless there is an extended bullish run, the second major resistance at $0.00000203 should cap further upside movement. SAFEMOON’s performance over the next few hours could largely depend on the performance of the general cryptocurrency market.