The cryptocurrency market has retraced after a strong weekend, and further losses could be on the cards

The cryptocurrency market finally retraced yesterday after rallying for the past few days. Bitcoin and the other leading cryptocurrencies all recorded losses over the past 24 hours. After topping the $47,000 level, BTC lost 3.6% of its value and is now trading in the $45,000 region.

Ether also rose close to the $3,300 level but has lost 4% of its value and is now trading just above $3,100 per coin. Litecoin fell by 3.6% yesterday, eliminating the 1% profit it made on Sunday. The loss came after Litecoin began Monday with a bullish run, closing in on the $190 mark.

However, LTC fell to a low of $179 before the end of the day. Currently, Litecoin is trading at the $178 level and could sustain further losses if the market correction continues. Leading market analysts believe that it is time for a healthy market correction as the rally has been sustained for the past few days.

The LTC/USDT 4-hour chart is looking bearish at the moment, reflecting the state of the broader cryptocurrency market. At the moment, Litecoin is trading at the 23.6% Fib level of $178. The cryptocurrency will need to move past this level and the $182 pivot if it is to make a run towards the first major resistance level at $186. 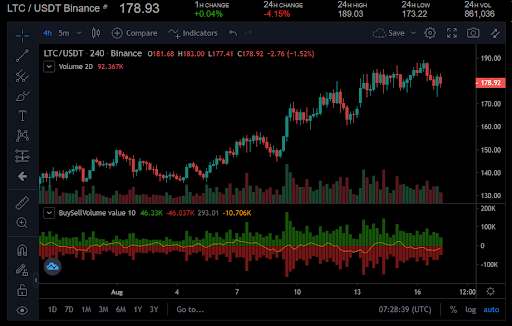 If the broader market recovers from the recent correction and resumes its rally, LTC could look to make a run at the $193 resistance level. However, it could be tough to go beyond that unless there is an extended bullish run.

On the flip side, failure to move past the $178 level could see the bulls required to defend the first major support level at $174. Unless there is an extended market sell-off, Litecoin should comfortably defend the next support level around $170.