The price of Bitcoin (BTC) has recovered above $46,000 after a brief slide in early trades on Tuesday. The crypto king now trends towards $46,700 and an injection of upside pressure could see BTC rally past $47,000 once again.

As that happens, on-chain analytics platform Glassnode has reported that miner revenue on the Bitcoin network has grown by 57% since the crackdown in China sent miners scurrying out of the country.

While several miners shut down, with the capitulation sinking Bitcoin prices, those that continued to secure the network have seen their income steadily increase.

Glassnode also notes that almost half of the miners were affected by the Chinese crackdown, but as they have returned to the network, the hashrate has picked up.

From around mid-July, Bitcoin’s hashrate has recovered by about 25%, which means the number of miners to switch on their machines again has jumped 12.5%. The 7-day average chart shows total computational power securing the network today is 117 EH/s, still some way off the peak of 180 EH/s in mid-May. 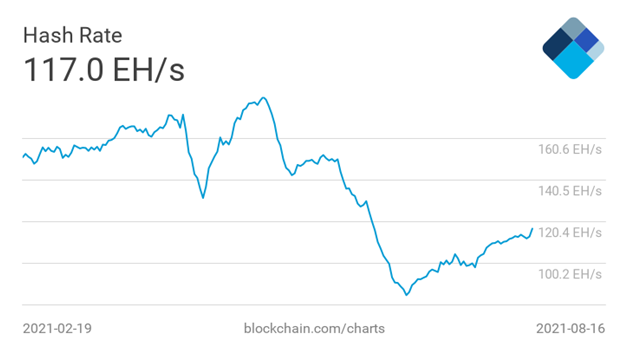 A chart of the Bitcoin hashrate over the past six months. Source: Blockchain.com

The chart below shows the corresponding relationship between the dip in hashrate and the decline in revenue, as well as the uptick in the earnings as the network metric recovered. 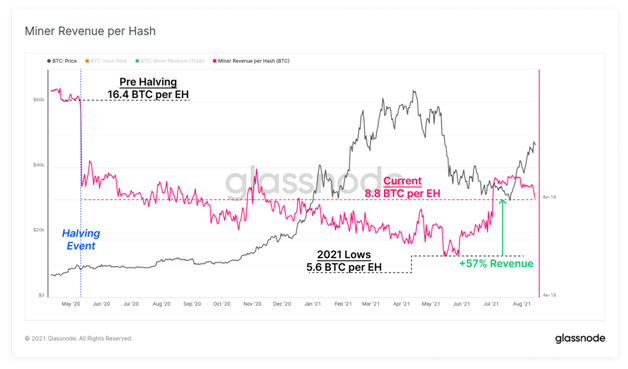 The increase in revenue has seen miners reduce selling, with total net balances of around 5,000 BTC per month. This is likely to serve as a positive trigger for Bitcoin’s price if miners continue to aim for higher returns.