IOTA pulls back after rising by over 20% in a week

IOTA pulls back after rising by over 20% in a week

IOTA has enjoyed a stellar week, but the cryptocurrency is now consolidating alongside the broader crypto market

While the market might be consolidating at the moment, the general outlook remains positive, and analysts and market experts are confident of the medium and long-term performance of cryptocurrencies.

The IOTA/USDT 4-hour chart remains bullish despite the cryptocurrency currently trading in the red zone. At the time of writing this report, IOTA is down by 1.29% over the past 24 hours but remains up by 20% in the past seven days.

The bulls will have to defend the first major support at $0.9952 if they stand a chance of reversing the trend and continuing the rally. IOTA’s 4-hour 100 simple moving average ($0.8944) should limit further downward movement over the coming hours. Unless there is an extended market sell-off, IOTA should steer clear of the second major support level at $0.8763. 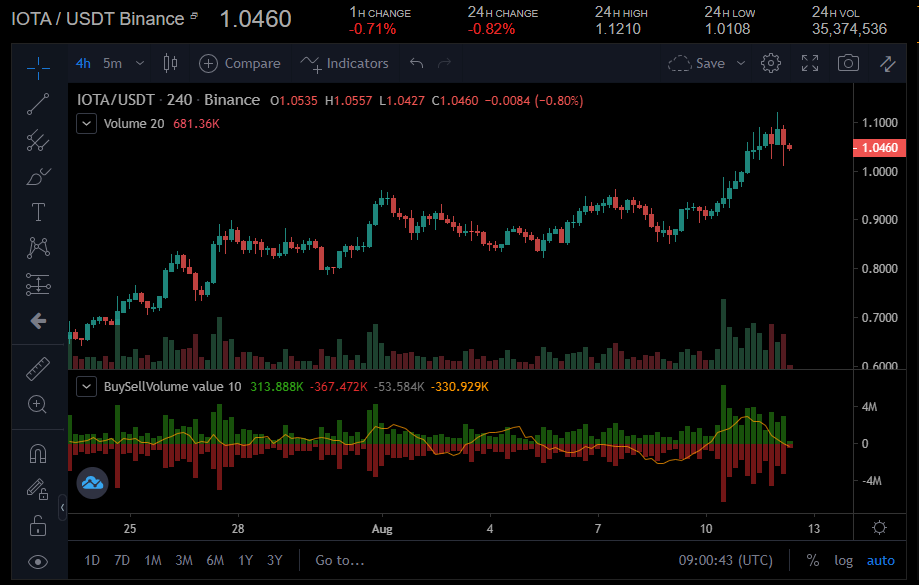 In the event that the bulls regain control of the market, IOTA would need to cross the resistance level at $1.0956. A movement past that point would bring the next major resistance at $1.12 into focus, giving IOTA enough momentum to set a new 30-day high. If the broader market embarks on an extended rally, IOTA could look to surpass the $1.16 resistance level in the coming hours or days.