Rallies for the top two cryptocurrencies have injected optimism into the altcoin markets, with TRX poised for a bullish breakout

The price of Tron (TRX) is up 6.2% in the past 24 hours, trading as high as $0.079 on the day. With over $1.3 billion worth of TRX recorded in daily volume, the 27th ranked cryptocurrency is likely to target further gains amid the increasing buy-side pressure.

The gains mean TRX price is now up 22% over the past week, with intraday gains continuing the digital asset’s impressive performance since crashing to lows of $0.045 in June.

As bulls target higher moves, it’s worth noting that the current upside is buoyed by the positive sentiment surrounding Tron Foundation’s $300 million investment in Tron Arcade.

It also follows positive moves for Bitcoin and Ethereum, which have cascaded into the rest of the crypto market. 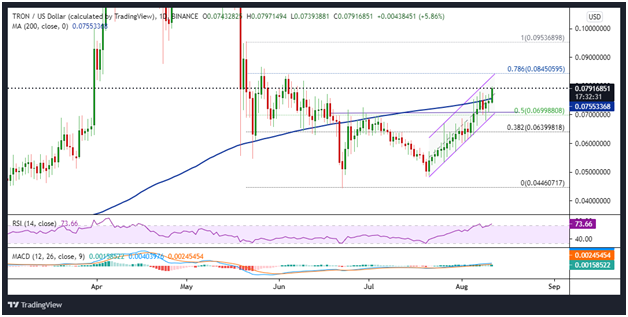 The TRX/USD pair continues to trade within an ascending parallel channel since a textbook rebound off the $0.050 level on 21 July. The uptrend saw bulls breach the 38.2% Fibonacci retracement level, with overall market pressure forcing buyers to defend the level.

Tron price broke higher and a retest of the 50% Fibonacci retracement level ($0.070) has allowed bulls to attack and breach the main barrier presented by the 200 SMA. The supply zone, which also capped TRX in early July, has been the center of consecutive rejection and currently hugs the $0.076 line.

What this suggests is that confirmation of a fresh breakout could see TRX/USD continue to the resistance line of the ascending channel.

The technical outlook for TRX is enhanced by the daily RSI which just entered the overbought territory and the daily MACD that has begun to strengthen after forming a bullish crossover.

In case of a pullback and price break below the aforementioned 200 SMA support level, bulls might have to defend the 50% Fib level ($0.070) to avoid losses towards $0.064.