ADA/USD is in an uptrend after bouncing off support around $1.04 on 21 July

Over the weekend, the price of Cardano climbed to a seven-day high of $1.39 before retreating from what might turn out to be a temporary barrier in the $1.38 to $1.40 zone.

The bullish resilience followed a bounce-back performance off intraweek lows of $1.22, which pushed ADA/USD higher after bears threatened more damage following the formation of a head and shoulders pattern on the daily chart.

Importantly for bulls, ADA recorded a weekly close above $1.30, which one analyst recently identified as being crucial to Cardano’s continuation of an uptrend.

According to Rekt Capital, the upside to highs of $1.39 generally align with Cardano’s price history. However, bulls needed to hold above the vital support line “to prolong the uptrend“.

Bulls are currently trying to strengthen above the 50 MA line ($1.31) on the daily chart. The line has previously acted as a resistance level on multiple occasions over the past few days, but fresh increases above this area will likely turn it into a primary support area and help catapult ADA/USD to a new multi-week high. 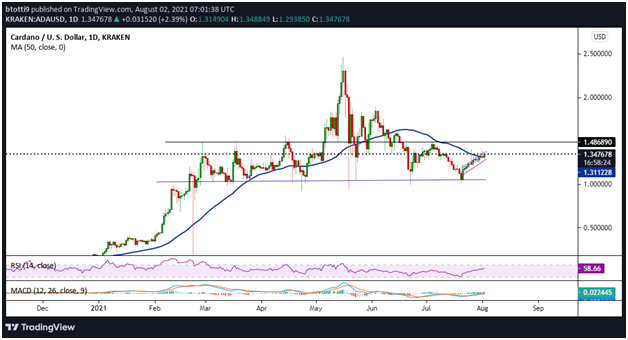 As seen on the chart above, Cardano’s price has also been rising within an ascending channel. Holding momentum and seeking higher moves will push prices above the upper trendline and see buyers target recent rejection points around $1.39.

The daily RSI and MACD are suggesting bulls have control and a breakout above $1.40 will open up a fresh run to the $1.50 line, potentially sending ADA towards $2.00. This will also see buyers have an opportunity to attack resistance near Cardano’s all-time high of $2.45 reached on 16 May 2021.

It’s a positive outlook for Cardano, but if the market flips negative in the short term, bears could fancy $1.14 and a retest of the immensely significant anchor at $1.00.