IOTA embarked on a huge rally over the weekend, but its value is now down by 6% after failing to break past the $1 resistance level

The cryptocurrency market entered a consolidation period over the past 24 hours following a massive rally during the weekend. Bitcoin breached the $40k mark for the first time in weeks while Ether attempted to reach $2,500.

However, the bears regained control, with Bitcoin’s price now trading in the $37k region and Ether now below $2,300. IOTA lost 6% of its value over the past 24 hours, dropping to the $0.70 region after failing to breach the $1 resistance point during its recent rally.

However, the general outlook for IOTA and the broader cryptocurrency market remains positive in the medium and long term.

We are here with #Bitcoin. pic.twitter.com/3G53kucuGG

The IOTA/USD 4-hour chart is in a bearish trend at the moment. However, it is slowly recovering from recent losses, with IOTA now up by over 1% over the past 1 hour. At the time of this writing, IOTA looks as if it’s about to cross the $0.760 mark and surge higher. 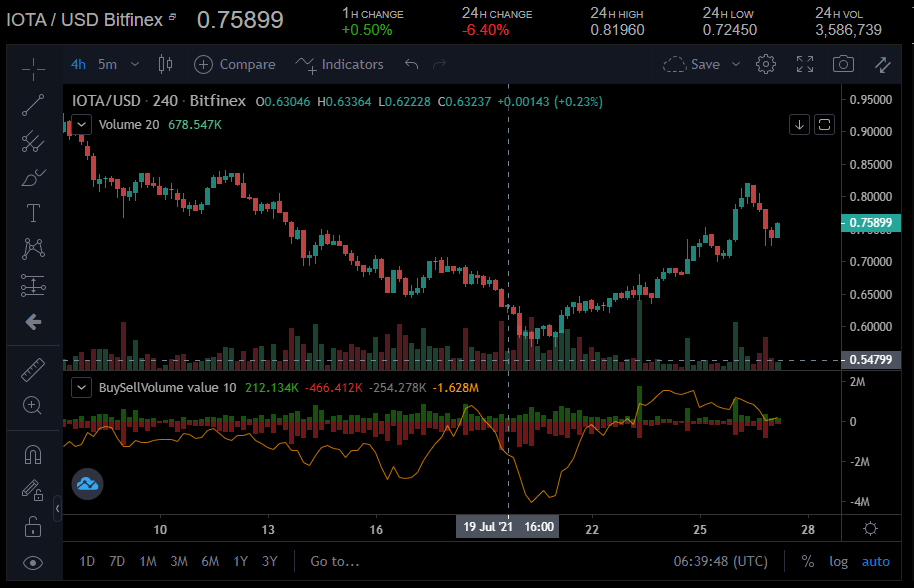 If the bullish sentiment returns and IOTA continues with the upward trend it started an hour ago, then the IOTA/USD pair could look to surpass the 24-hour high of $0.8347. Unless there is an extended market rally, the resistance level around the $0.85 mark should limit any potential upside. In the event of an extended market rally, IOTA could look to break past the minor support point at $0.90 and head towards $1.0