The cryptocurrency market has been rallying over the weekend, and Litecoin’s price surge could see it reach $150 soon

The cryptocurrency market recorded a positive weekend, with several cryptocurrencies rallying. Bitcoin finally surpassed the $35k resistant level and is now trading just above $38k. Ether is also well above $2k and is heading towards the $2,500 resistance point.

The LTC/USD 4-hour chart is looking very bullish at the moment, thanks to an extended rally from the broader cryptocurrency market. LTC is now well above its 100 simple moving average (SMA) on the 4-hour chart at $124, providing especially strong support around that region.

The moving average convergence divergence (MACD) line is well into the bullish territory, a sign that the rally might continue if the market conditions hold. Litecoin’s relative strength index (RSI) is also in the overbought region, the first time it has entered this region for about a month. 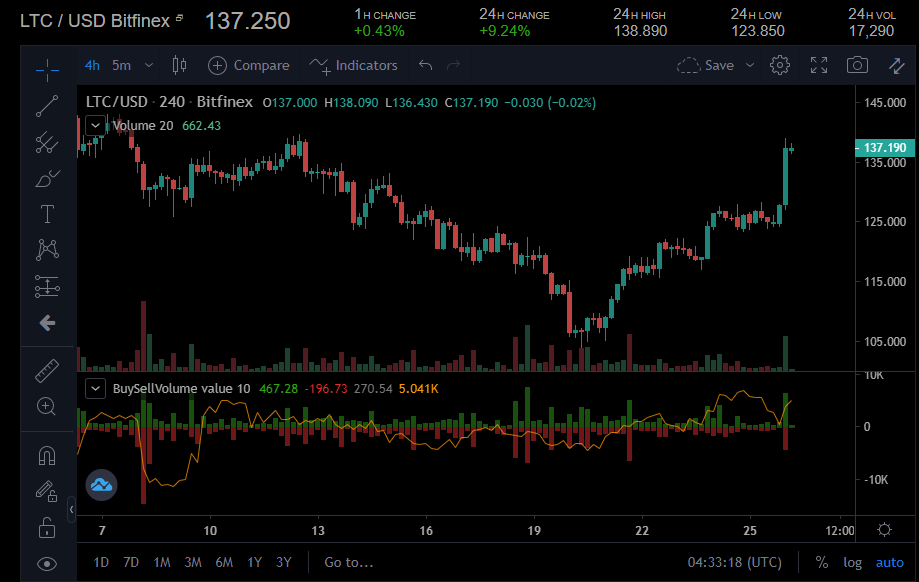 LTC is currently trading at $137 per coin. If the current rally continues, Litecoin could soon surpass the $144 resistance point and head towards $150. An extended market rally could see the LTC/USD pair attempt to reach the $170 over the next few hours or days. However, the extended rally is dependent on the performance of the broader cryptocurrency market.

In the event that the bears regain control of the market, Litecoin could lose its minor support at the $130 level. A further decline below $120 could then be expected. However, the support level at $108 should limit any downward movement that could see Litecoin slip below the $100 mark.