The cryptocurrency is still in a bearish cycle, and Binance Coin’s decline could see it dip below the $300 mark

The cryptocurrency market didn’t perform well over the weekend, and losses could extend further during the course of the week. Bitcoin’s price is still trading just above the $31k mark, unable to mount a rally past the $35k major resistance level.

Binance Coin (BNB) was one of the biggest losers amongst the leading cryptocurrencies last week, and it could experience more losses this week. The regulatory pressure on Binance in the United Kingdom—and recently Italy—could have a negative impact on BNB’s price in the coming hours and days.

Binance is currently under pressure from regulators in some parts of the world. Since its challenges began in the U.K., BNB’s price has dropped by over 10%. The BNB/USDT 4-hour chart shows that the cryptocurrency is in a bearish cycle at the moment and could slip lower over the coming hours. 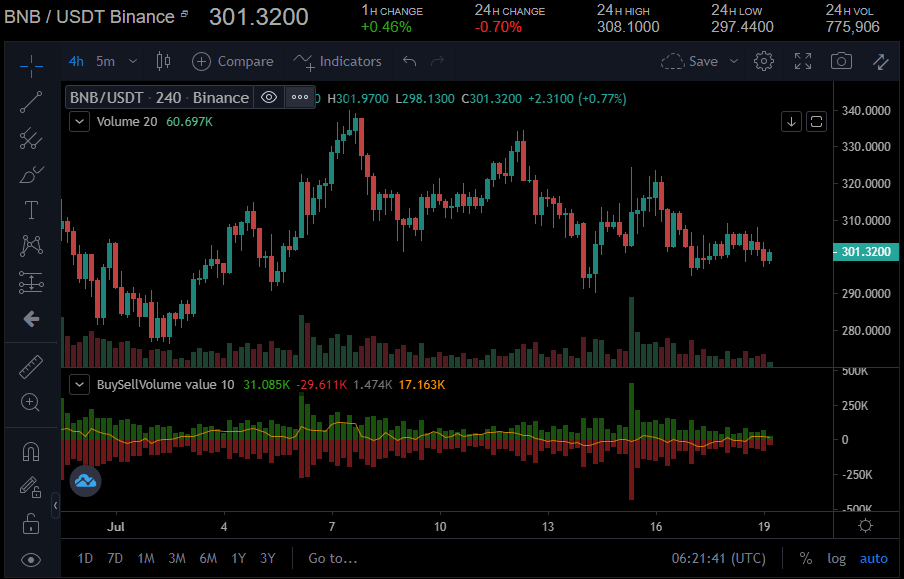 The technical indicators such as the MACD and RSI all show that BNB is in the red zone and could likely stay there for now. If the current trend is maintained, BNB could drop below the $300 support level, bringing the first major support level at $295 into focus. Several lower highs have also been recorded, indicating sustained downward pressure.

Unless there is an extended sell-off in the broader market or Binance comes under pressure again, BNB should be able to maintain the sub-$290 level over the next few hours.

However, any positive news from Binance or the general cryptocurrency market could serve as the needed catalyst to push BNB past the first major resistance point at $310. BNB might find it hard to extend a rally past the $322 resistance point unless there is a massive upward movement from Bitcoin and the broader market.