Tron has underperformed over the past 24 hours, failing to defend the major support level at $0.06238 and risks dropping below the $0.060 mark over the next few hours.

Tron is another leading cryptocurrency that suffered losses yesterday, losing nearly 5% of its value in the process. TRX ended yesterday trading at $0.06404, reversing the gains it recorded on Tuesday.

The losses continued today, with TRX failing to defend a major support level around $0.06238. In the short term, Tron looks likely to record more losses over the next few hours and days. With analysts expecting Bitcoin to drop towards $31k, TRX and other altcoins might also decline in the coming days.

#Bitcoin still acting inside the range, no decision has been made.

For the day ahead, the TRX/USD 4-hour chart is looking very bearish at the moment. TRX has dropped below its 100-day SMA (0.06356) and risks recording further losses over the coming hours.

The failure to defend the major support zone at $0.06238 has seen Tron drop below the $0.06200 mark. The bulls would now be forced to defend the next major support level just above $0.0600. An extended bearish sentiment from the market could drag TRX below $0.0600 for the first time in two weeks. 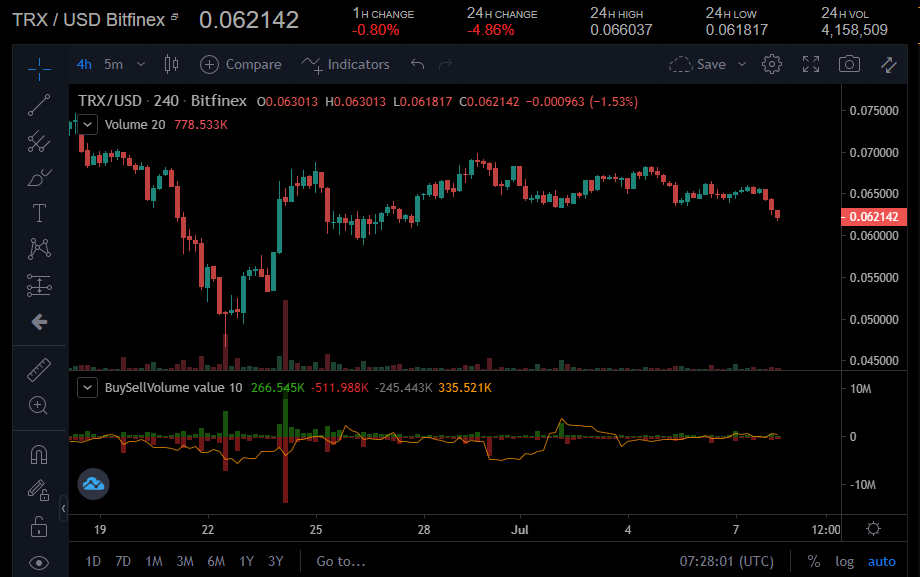 However, if TRX is able to get out of its current bearish trend, it could reclaim its support level at $0.06238. This would allow it to extend its run and target the next resistance point at $0.06476. At the moment, TRX’s price is far off from its 23.6% FIB Retracement Level at $0.0787. Unless it gets major support from the market, it is unlikely that TRX could rally towards that region in the coming hours.