EOS has been flirting with the $4.00 region in recent days, but the bulls have been unable to muster enough rally to push it comfortably above this level.

The cryptocurrency market continues to be in a bearish cycle, stretching back to May. With the bearish sentiment around, Bitcoin is still trading below $35k as it struggles to surpass the $40k resistance level.

EOS was once one of the top ten cryptocurrencies in the world. However, it has lost its place in recent months as other crypto projects gained adoption and increased market caps. Now down to 28th position, EOS is in danger of being overtaken by the Shiba Inu token.

The EOS/USD pair had failed to mount a serious challenge to reach the $5 mark a few days ago after breaching $4.3 this weekend. The announcement in Wyoming caused the weekend rally.

With EOS now falling below $4 again, the EOS/USD 4-hour chart indicates that the cryptocurrency could record further losses over the next few hours. If the current market conditions continue to apply, the bulls would have to defend the $3.30 resistance point over the coming hours or days. 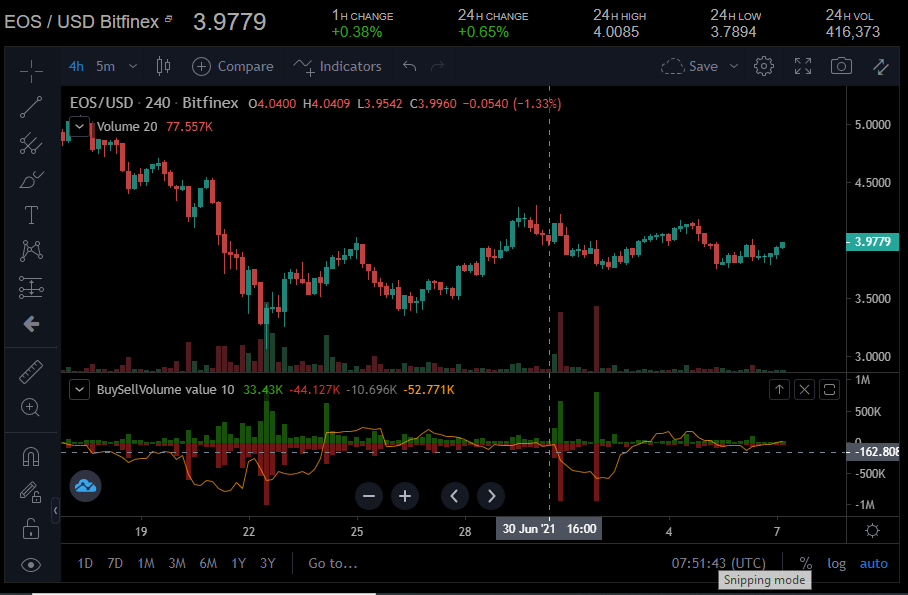 However, if the bulls regain control of the market, the EOS/USD pair could surpass the 4.00 level again and attempt to reach $4.300, its 7-day high. EOS could mount a serious rally towards the $5 region if it gets help from the broader cryptocurrency market.