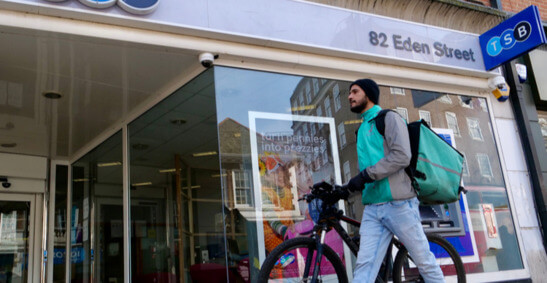 The bank has singled out Binance and Kraken, saying the exchanges have failed to respond to security concerns

A man walks past a TSB Bank building in London

UK bank TSB is looking to prevent 5.4 million of its customers from using their accounts to buy cryptocurrency.

The commercial lender is reportedly taking this step because of concerns over increased fraud at crypto exchanges, which expose their users to further losses.

According to sources cited by The Times, TSB is specifically targeting Binance and Kraken for what it terms as the platforms’ ‘low security standards‘ that make the two exchanges most vulnerable to fraudulent activities.

The bank, which operates 536 branches across the UK, has cited instances of weak security that have allowed fraudsters to “set up e-wallets and steal people’s money.”

On 15 June TSB published advice to its customers asking them to “be extra vigilant when it comes to crypto investment advisors.” According to the bank, customers should guard against engaging with calls, e-mails or texts from crypto-related sources as they are “a scam.”

Be extra vigilant when it comes to Crypto investment advisors. If you get a call, e-mail or text from one – bin it, it’s a scam. Never engage with contact out of the blue. Find out more: https://t.co/jfNPCdlkzJ #ThinkTwiceThinkFraud pic.twitter.com/A835A7qJy5

TSB Bank reportedly received 849 fraud-related reports on Binance alone between March 15 and April 15. TSB customers claimed to have lost money in the 30 days, with the bank then seeking Binance’s response on the matter.

However, according to The Times report, the exchange failed to cooperate and “hardly” does regardless of all efforts.

Binance has refuted these claims, adding that it takes its responsibility on user protection “very seriously.”

“When we are made aware of these claims, we immediately take action and have an excellent record of working with law enforcement agencies,” Binance said in a statement.

Kraken has also responded to TSB’s fraud accusations, with the exchange’s compliance officer Steven Christie stating that the platform Kraken had “responded to well over 1,000 different requests from law enforcement agencies in 2020 alone.”

He added that the exchange’s operations adhere to regulatory and compliance requirements.

The move by the TSB bank comes just days after UK regulator FCA warned that most crypto investors did not pay attention to warnings and advice regarding cryptocurrency investing.

Its latest research showed that nearly 2.3 million UK adults hold crypto or have invested in it before. However, just one in ten knew of the various regulatory warnings about cryptocurrency.