Tezos has several exciting updates in the pipeline — can these move the XTZ price in June?

Created to be a better version of most smart contract enabled blockchain networks, Tezos holds similarities to the largest ones such as Ethereum, allowing an open-source platform for developers to leverage blockchain and smart contracts to build advanced protocols and solutions. Its XTZ token enjoyed a large price increase in the recent crypto bull run.

Starting at $2 in January this year, Tezos (XTZ) rode the larger crypto industry wave and reached its all-time high of $7.785 in the first week of May. Sharp corrections in the middle of the same month pushed down its prices and as of 14th June, XTZ is being traded at $3.258, marking a 41.85% drop. The monthly low so far is $2.927, recorded a few days ago.

Will Tezos dip below that or go above before June is over? Let’s find out

Tezos was priced at around $2.62 in the middle of June last year and started to gather steam in the third quarter of 2020, which was quickly lost in a couple of months, only to come back stronger in February of this year. After a couple of ups and downs, XTZ was able to hit $7.785 before again going down. June 2021 has witnessed a tight range of XTZ price movement.

If negating the extreme high movements and taking into account the prices 12 months apart, there is not much overall profitability. On the other hand, it has made great strides (and falls) in the last few months. Clearly, a short term investment and trading strategy will work for Tezos.

Tezos has been working on upgrading its services and its next large update Granada is now being tested in what the platform is calling an exploratory phase. The update brings a host of changes to the Tezos infrastructure, such as reducing the block production time by half and decreasing the overall gas costs by up to 80%. Once these changes are implemented on the mainnet, Tezos will overtake major blockchain ecosystems in terms of efficiency and speed, giving huge advantages to developers who shift their protocols on its network.

Smart contracts have also witnessed improvements through its next version of SmartPy, a large library that helps in building not only the contracts but also for analysing and auditing these.

An already efficient DeFi ecosystem, Tezos has already caught the eye of OpenSea at the start of the year and it has announced that it will be integrating its services on the Tezos network. OpenSea will be using Tezos’ FA2 standard, which allows for fungible, non-fungible, and even non-transferrable token types in one single interface.

On the NFT note, Hic et Nunc 2000, the NFT platform, has recently overtaken OpenSea this month and is based on the Tezos network, showing that the network is gaining momentum.

There are a lot of platforms that seem to be developing on the Tezos network. The official website officially has listed 10 different development and engineering positions that range from frontend engineer to Director of Engineering. Other openings are in the areas of marketing and communications and even one for operations.

While the fundamental indicators and analysis show a piece of positive news for XTZ, most of its effects will be felt in the midterm range, from a few weeks to months down the road. For an accurate prediction of Tezos price for June 2021, the technical indicators have a slightly different story to tell. 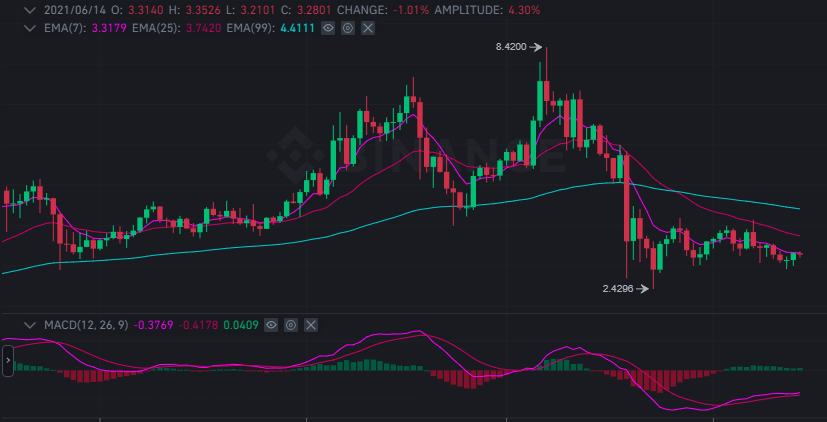 Looking at the 1-day candlesticks, we can clearly see that a tight range has been established and that the EMA of 7 days (magenta) and 9 days (red) are starting to converge. If this trend continues, a short term convergence gets stronger, indicating that the price will not likely be moving much up or down.

The MACD shows a piece of slightly positive news, with the magenta resisting a bearish crossover and is just starting to rise. This might mean XTZ will go up, but not by much and gains will likely be small. 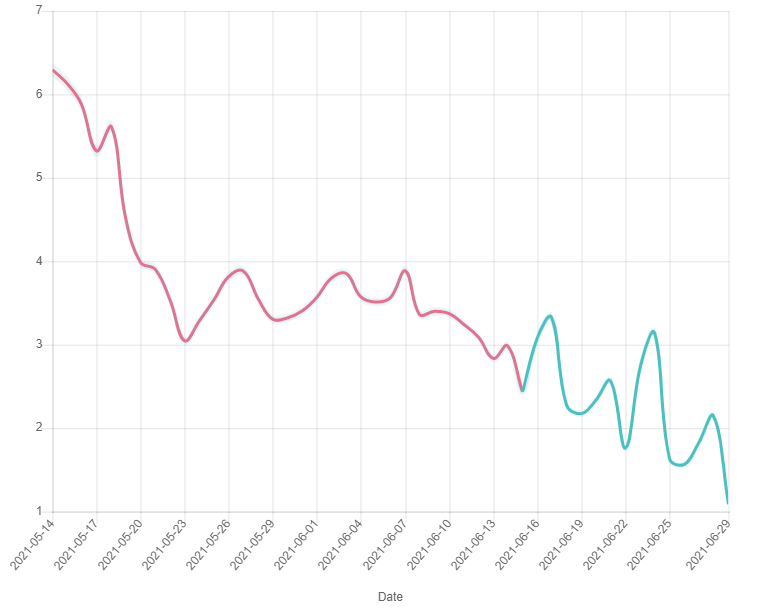 Gov Capital, the online asset price prediction platform, projects that during the remaining days of June 2021, Tezos will witness small ups and downs, but will decline in value overall. Hitting a maximum predicted value of $3.33, it will apparently fall down to an estimated $1.08 on the last day of this month.

The values given by Gov Capital are based on its proprietary AI system that takes different values such as past prices, trading volume and well-studied market cycles.

Though Tezos and its XTZ token are set to break out again in the coming months as indicated by the fundamental indicators and supported by long term technical analysis, the indicators in the short term show that there will be not much of a price movement up, and as July approaches, the value has the possibility of falling further.

Of course, all of these are predictions and there are countless other factors that can have a major impact on the price and cause it to break out to rise exponentially or keep on following the downtrends.

The new fiscal year is about to start and countries all over the world are presenting their budgets. This includes the largest one by the USA, amounting to $6 trillion. This can alone move people to go after DeFi even more as the large injection of money can lead to pressure on reducing interest rates and weaken the US Dollar.

On the other hand, if regulations that increase taxes on cryptocurrency trading and investing and other rules that make it difficult to deal in digital assets are passed, these can cause an aversion to people buying cryptos.