Elon Musk has once again affected the Bitcoin price with a Tweet, but bucked the recent negative trend by giving the original cryptocurrency a daily gain of more than ten per cent. On 13 June, the Tesla CEO tweeted that the firm will resume BTC payments for its vehicles when Bitcoin mining is demonstrably dominated by renewable energy. The Bitcoin price is now around $40,000, up by more than 10% over the last week.

Where to buy Bitcoin

If you believe that Elon Musk’s latest announcement could be the first of many, you may want to buy Bitcoin in order to capitalise on a market rally. If you want to beat the crowds and buy now, here are our top picks for where to buy Bitcoin.

eToro has been around for more than ten years and is one of the most trusted online broker platforms out there. You can buy Bitcoin and a whole host of the other top cryptocurrencies with low fees on eToro, and rest assured that your funds are in safe hands. The crypto world may feel like the Wild West sometimes, but eToro is fully regulated in most countries including the UK and most of the USA.

Coin Kong is a top brokerage service that connects you with the lowest-fee markets in your region. Simply sign up with your name, email, and phone number, and get trading right away. Coin Kong provides access to Bitcoin as well as several of the other top performing altcoins, and prioritises user experience and low costs to help new traders get a leg up on their cryptocurrency journey.

Elon Musk Twitter: How does it affect the Bitcoin price?

It seems like aeons ago that Musk first signalled his involvement in the crypto space with the now-infamous Tweet, “In retrospect, it was inevitable”. The post referred to the inclusion of #bitcoin in the EV magnate’s Twitter bio, and was the first clue that an Elon Musk bitcoin investment might be on the cards. It later transpired that Tesla bought bitcoin worth $1.5 billion.

When Tesla bought bitcoin, a rally ensued that led to a series of new all-time highs, the most recent being just a whisker off $65,000 in mid-April. In true poetic fashion, however, it was another Elon Musk Bitcoin announcement that led to the end of this bullish run. In May, he announced that Tesla would no longer accept BTC payments for its vehicles, citing the use of fossil fuels in mining the coin, which arguably makes Bitcoin bad for the environment.

This led to a market crash that halved the value of the cryptocurrency, and several other Tweets had a significant effect on the price of Bitcoin after that. The latest Elon Musk Bitcoin tweet, however, is more positive, and could lead to another huge bull run like that seen in January and February of this year. 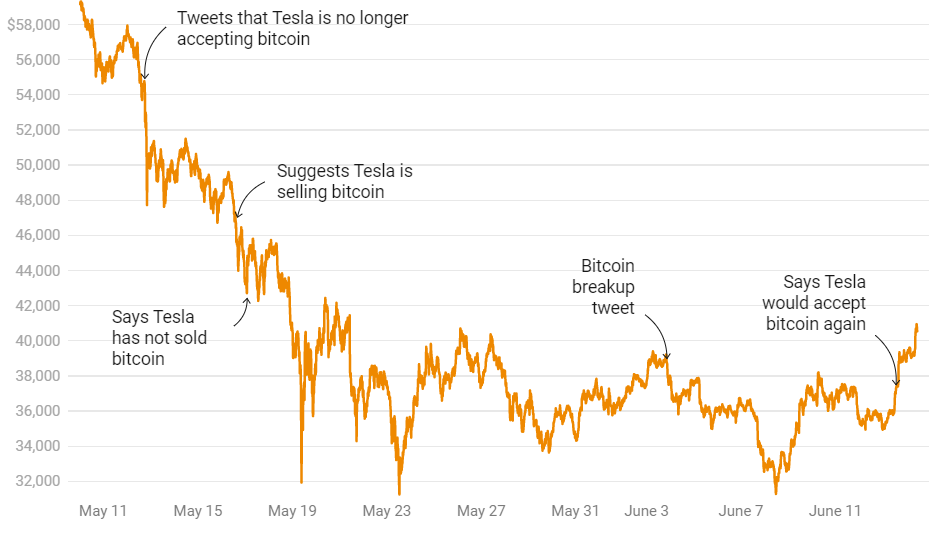 How much Bitcoin does Elon Musk own?

Did Elon Musk sell his Bitcoin? The answer is yes — but only partially. The initial Elon Musk bitcoin purchase for the Tesla treasury was valued at $1.5 billion. Tesla sold bitcoin constituting around 10% of its total holdings in Q1 2021, earning the manufacturer $101 million in profits. Tesla still holds around 38,300 BTC, according to Fortune. The fact that Tesla did not sell any bitcoin during the May crash is a testament to Musk’s belief in the coin, and that its value will eventually soar again.

This is inaccurate. Tesla only sold ~10% of holdings to confirm BTC could be liquidated easily without moving market.

Tesla Bitcoin payments to resume: will the market rally?

The SpaceX founder’s most recent Tweet led the Bitcoin price to rise as it signalled a change in sentiment. Musk declared that Tesla will start to accept Bitcoin payments for vehicles again, after suspending this option in May due to environmental concerns.

According to Musk, Bitcoin mining is potentially harmful to the environment. The electric vehicle tycoon has stated that he is concerned about the amount of coal-derived energy used in mining, the process that distributes new bitcoins and secures the network. However, Musk says that once mining is sufficiently eco-friendly, Tesla Bitcoin payments will once again be possible.

This may happen soon, as Bloomberg reports that the Bitcoin Mining Council (BMC) launched its website this week. The BMC aims to improve transparency around mining, and this is said to be aimed at increasing renewable energy use in Bitcoin mining operations. If Tesla starts accepting payments again as a result, the market could see a huge rally, judging by the positive effects of past Musk tweets.