Cardano (ADA) showed remarkable resilience during the May cryptocurrency meltdown attributed to Tesla CEO Elon Musk and regulatory restrictions in China. Tesla moved to halt Bitcoin payments for car purchases, citing the cryptocurrency’s adverse impact on the environment. That decision shook confidence in cryptocurrencies across the world.

As if adding insult to injury, China decided to ban institutional cryptocurrency trades. It went on to put crypto miners on notice. At the same time, the US Treasury proposed more stringent crypto tax compliance, unnerving many investors.

Amid these headwinds, ADA continued to thrive, hitting an all-time high of $2.46 on 16 May. It stands out as one of the best-performing major altcoins in 2021. Even after the 30% pullback from the recent peak, an investment in ADA coin in January has returned more than 850%.

If you don’t have Cardano in your portfolio already, you might be wondering whether it is too late to invest in ADA coins. To answer that, you need to look at Cardano price prediction for June 2021.

While assessing Cardano’s price outlook, it is also important to familiarise yourself with it. Cardano blockchain was launched in 2017. Its rise stemmed from a disagreement in the team that built Ethereum. Charles Hoskinson participated in developing Ethereum but at some point disagreed with the colleagues on how to run it. He left to start Cardano, which describes its goal as enabling positive global change.

Cardano has become one of the so-called Ethereum-killer blockchain networks. It uses an energy-efficient Proof of Stake (PoS) system. Its rival Ethereum is currently based on the Proof of Work (PoW) concept but is also working on shifting over to the PoS mechanism. The PoW system, which Bitcoin pioneered, has been heavily criticised by environmentalists because of its energy use.

Upgrades on the Cardano blockchain go through a peer-review process before they roll out. The peer review process means that Cardano upgrades roll out slowly but they also make the blockchain durable and stable because potential pitfalls can be caught early and fixed.

What is the current Cardano price?

Cardano currently trades at $1.68 at the time of writing, giving it a market cap of $54 billion. That ranks it as the fifth-largest cryptocurrency behind bitcoin, Ethereum, Tether and Binance Coin. 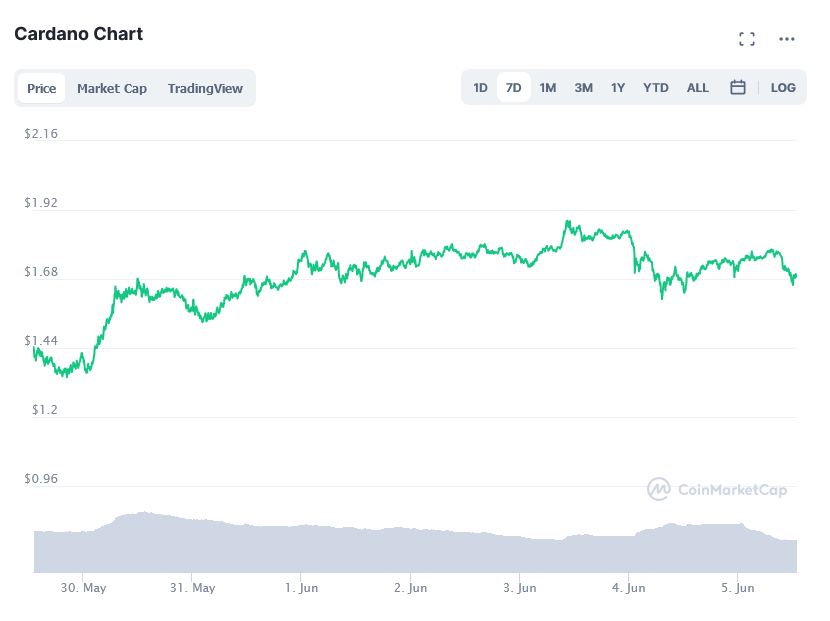 After Cardano hit an all-time high of $2.46 in May, investors are eager to know if the ADA price can move higher in June. The altcoin has climbed 14% in the past 7 days, putting average daily gains at 2%.

Assuming Cardano grows at that rate throughout the month, it could reach another all-time high of $2.76 in June. If it accelerates a little to grow 3% daily, then ADA price prediction points towards the $3.50 milestone in June. 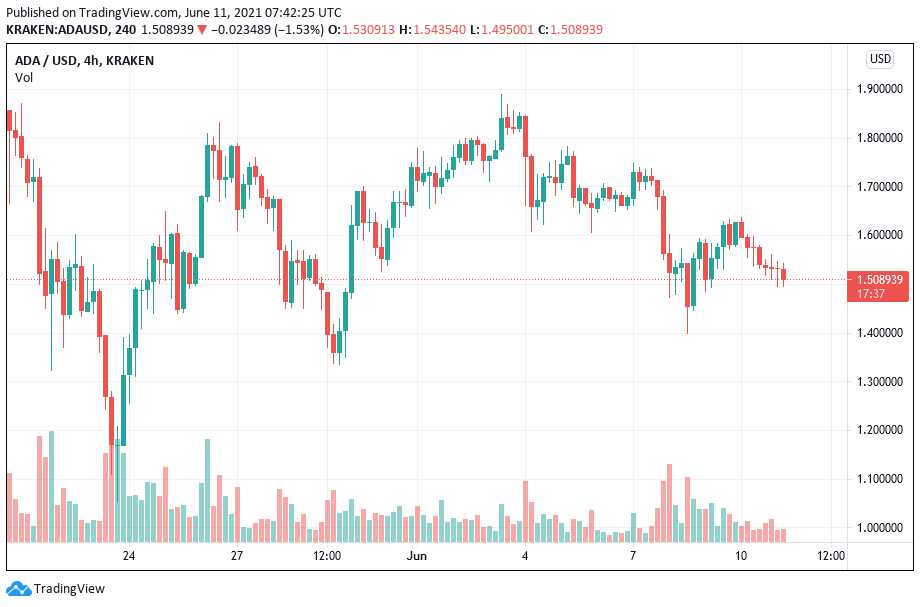 Cardano price has played between a low of $1.40 and a high of $1.90 in June. It has now established critical support at the $1.50 level. But the crypto is struggling to break through $1.85 that now stands as the immediate resistance level.

It may only be a matter of time before it storms past this critical resistance as the bulls are still in control as demonstrated by ADA price sustaining above $1.49 since pulling back up from the 30-day low of $1.03.

A confluence of factors supports a bullish price outlook for Cardano cryptocurrency in June 2021. Here is a look at some of the factors that could move ADA prices north this month.

Smart contracts are coming: Cardano is about to challenge Ethereum in a big way. For many developers, Ethereum has become the default blockchain for launching decentralised apps or dApps and this is primarily because of Ethereum’s support for smart contracts.

Cardano is bringing smart contracts support too with its Alonzo upgrade and much progress toward that end will be made during this month. It would increase activity on the blockchain and drive up demand and the value of ADA coin, just like the rise of DeFi projects on Ethereum has boosted Ether price. Cardano is currently training 1,000 developers interested in building dApps on its blockchain.

Cardano founder Hoskinson has said that many dApps have expressed interest in switching over to Cardano from Ethereum. While all dApps won’t flee Ethereum, many want to use both Ethereum and Cardano. Either way, Cardano utility is poised to increase and ADA token adoption is expected to rise with the coming of smart contracts feature.

Cardano linking with Nervos: Cardano is working on launching a cross-chain link with the Nervos Network in the coming weeks. The linking will enable interoperability across the platforms. That will give ADA token more exposure and potentially boost its uptake and price since it will be able to be used to run transactions on both Cardano and the Nervos blockchain. The link will also reduce transaction costs on the platforms, promising to bolster the appeal of the Cardano network and its ADA token.

Big funds are increasingly taking environmental impact into consideration when selecting investments. Since Cardano uses an eco-friendly PoS concept and considering its potential to boost financial inclusion, it is among the top altcoin picks for climate-conscious institutional investors. Cardano’s Hoskinson is expecting more big investors to adopt and voice support for the Cardano network. For example, he told crypto fund Grayscale that it won’t regret investing in ADA.

Time to add Ada guys. You won’t regret it

The next Ethereum at a fraction of the cost: Bitcoin and Ethereum have been big winners for investors looking at their blockbuster historical returns on investment. But they are not cheap. Cardano has the potential to deliver Ethereum-type returns but at a more affordable entry point. Therefore, ADA should continue to rise as investors pursue the next potential coin like Bitcoin and Ethereum.

Scarcity fuels demand: A major reason Bitcoin and Yearn Finance (YFI) prices are so high is that their supply is fixed and that makes investors believe they are scarce. ADA supply is similarly capped, creating a sense of scarcity that should propel the crypto as demand increases with the maximum supply limit fast approaching. 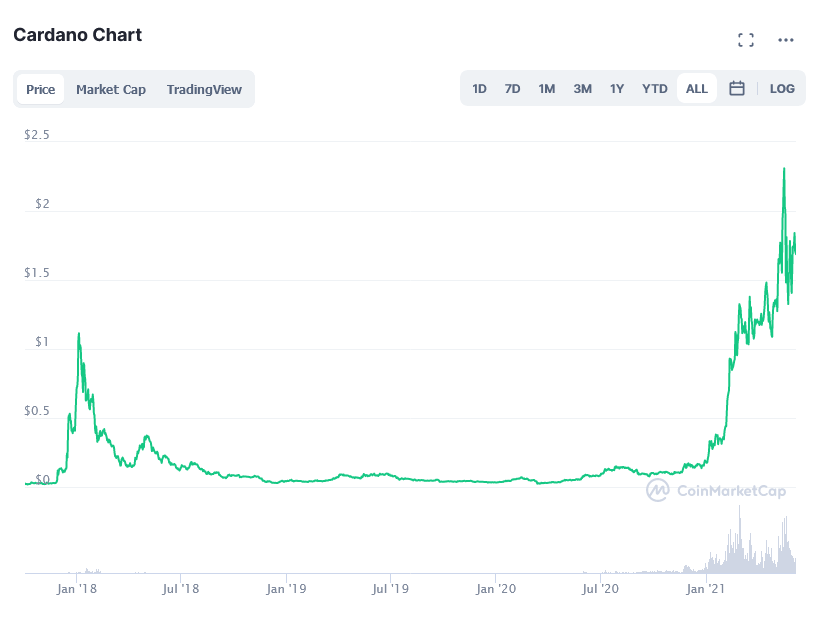 Longtime Cardano investors have a reason to be happy. The crypto carries lifetime returns of 8,000 per cent. Of course, that is below what Bitcoin and Ethereum have delivered since their debut, but still a big feat for a cryptocurrency that came many years behind the blue-chips.