Dogecoin has grown to become one of the most popular and widely used cryptocurrencies in the world. Of the leading cryptocurrencies, Dogecoin is perhaps the one that has gained the most adoption this year. At one point, the Google search volume for Dogecoin surpassed that of Bitcoin, indicating how popular it had become.

With the cryptocurrency market at a crossroad in recent weeks, several traders and investors keep wondering how the leading meme coin will perform. This article will examine Dogecoin’s price potential for June 2021.

How has Dogecoin performed so far this year?

Dogecoin is one of the best-performing cryptocurrencies in the world so far this year. The cryptocurrency started this year trading at $0.00708 per coin. However, it rallied to reach an all-time high of $0.7188 on 8 May, recording over 6,000% in profit since the start of the year. 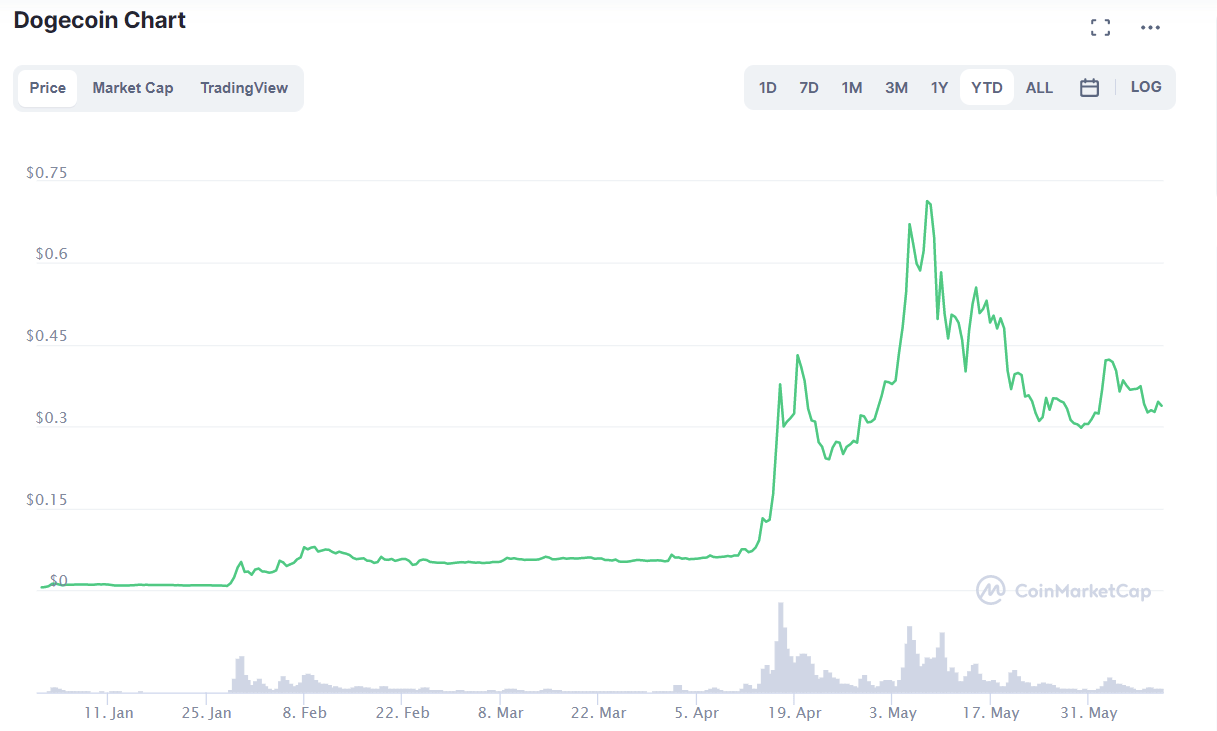 The price has cooled down, thanks to the ongoing market correction. DOGE is currently trading at $0.36, down by 50% from its all-time high price. However, it is still up by 3,000% year-to-date, with only a few cryptocurrencies boasting such a massive return on investment in under six months.

DOGE’s adoption could be due to its promotion by several popular names, such as Mark Cuban and Elon Musk. The Tesla and SpaceX CEO in particular is a huge fan of the cryptocurrency and has even suggested that the electric car manufacturer could accept it as a means of payment for its vehicles in the future.

What are the events that could affect Dogecoin’s price in June?

Dogecoin started June in an excellent fashion. The cryptocurrency was trading around $0.3 but rallied by nearly 30% to reach $0.5 last week. The rally was caused by Coinbase officially listing DOGE on its Pro platform.

The cryptocurrency continued to gain more coverage after Coinbase began giving away $1.2 million worth of DOGE. The reward has helped with the adoption, as more people became interested in the cryptocurrency. At the moment, Dogecoin is still up by 14% over the past week, making it the best performer amongst the top ten cryptocurrencies by market cap.

There are other events that could affect Dogecoin’s price over the next few weeks. Daymak, a Toronto-based manufacturer of personal light electric vehicles, has revealed that it has built a car that would mine cryptocurrencies like Dogecoin, Bitcoin and others while it is parked. The company went a step further to accept pre-order payments in numerous cryptocurrencies, including DOGE, ETH, ADA and BTC.  A German taxi company called Tesla Taxi Aschaffenburg is set to start accepting DOGE as payment for rides.

The San Jose Sharks, a National Hockey League (NHL) team, partnered with BitPay and will start accepting Dogecoin and other major cryptocurrencies. People can use DOGE to make purchases like ticket memberships and sponsorship deals; furthermore, the official app of the California-based hockey franchise will include a crypto payment option as users can pay for numerous things using DOGE.

Elon Musk has toyed with the idea of Tesla accepting DOGE as a means of payment. If that happens, DOGE’s price could rally higher over the coming weeks and months. Currently, the news of these adoptions could see Dogecoin’s price rally higher over the next few weeks. At the moment, Dogecoin’s price is still 50% down from its all-time high, representing a potential ‘buy’ signal for investors.

All in all, despite the vicious bearish price action of the past few weeks, Dogecoin has gained massive adoption so far this month. This is a testament to the tenacity of DOGE’s supporters and demonstrates that buy-side demand for the coin is likely to persist, or even increase throughout June.

As well as the flourishing fundamental picture for DOGE, there is cause for bullishness in the technical picture too. DOGE/USD has been able to hold the strong support at $0.30 for the past few weeks. With bears unable to break this key support level, Dogecoin is arguably coiling like a spring, ready to catapult off the current support level to resistance levels above $0.40. 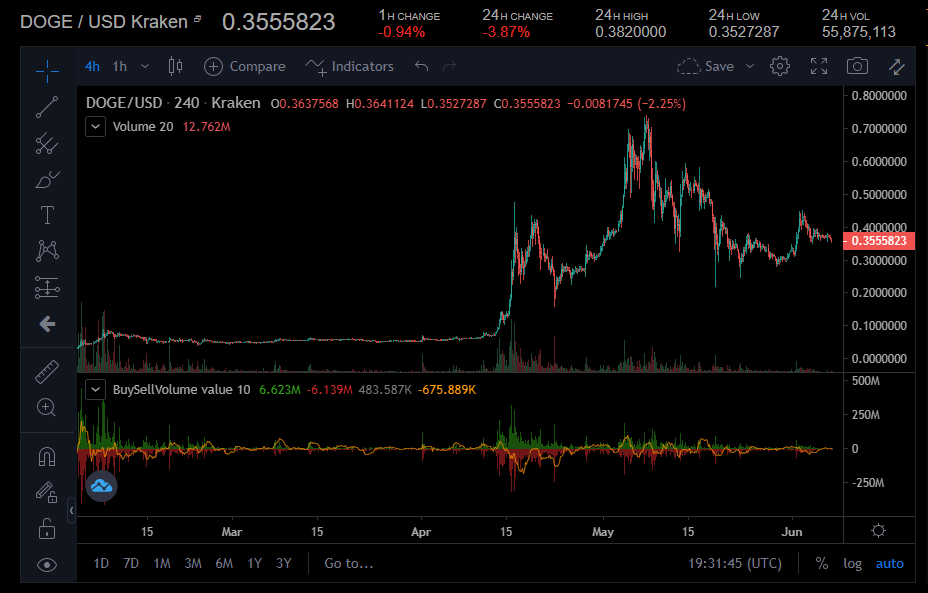 With the latest wave of adoption news, the DOGE/USD pair could gather enough momentum to break past the $0.43 resistance point. The cryptocurrency has found it hard to surpass that point, but any move above it could set DOGE up for a rally towards $0.50. Further upside would have to be supported by the broader market.

The crypto market is now in recovery. If this trend continues, a $0.50 DOGE price prediction for June seems like a reasonable target. Should Bitcoin’s current rally pick up steam, DOGE could lead the rest of the altcoin market out of the doldrums, with all the recent positive news providing a very bullish platform for the meme coin.