Litecoin, Ripple and Tezos are trading in the red over the past 24 hours and could go into the weekend in a bearish mode.

The cryptocurrency market’s performance this week was better than last week. However, the bearish sentiment isn’t completely over as Bitcoin is still struggling to surmount the $40k barrier. Ethereum is still stuck below $3,000, and the other leading cryptocurrencies are still in the red zone.

Litecoin, Ripple and Tezos are also performing poorly heading into the weekend. The three cryptocurrencies risk recording more losses over the weekend if market sentiment doesn’t change in good time.

However, market analysts such as Michael Van de Poppe believe the market will rise again, and investors shouldn’t make the mistake of selling their assets.

The market has a habit of becoming ultra bearish at support and ultra bullish at resistance.

Selling your #altcoins at the low, while FOMO’ing back in them, while the market chops.

Litecoin’s price is currently down by 2% after struggling to surpass the $210 mark over the past few hours. The cryptocurrency is now trading at $188 per coin and risks recording more losses over the coming hours. 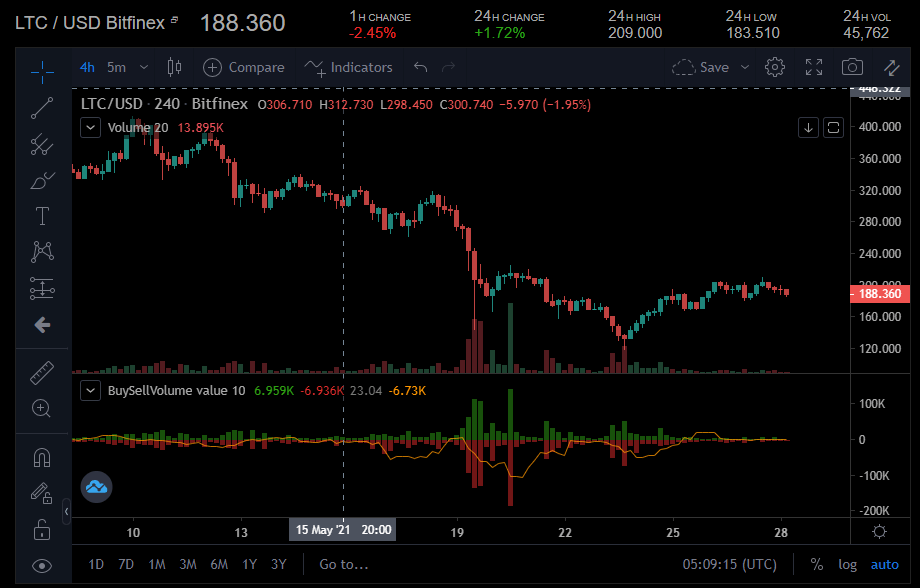 The LTC/USD 4-hour chart shows that Litecoin is currently bearish. If it fails to break past the $210 resistance point, then it could slip even lower, and the $171 support level would be exposed. Bulls would be forced to defend this support level because any further market sell-off could see LTC trading close to $130, which was last week’s low.

However, if LTC mounts a challenge past the $210 resistance region, it could mount a huge rally to reach $240 within the weekend. However, any upside movement would depend on how the general market performs.

XRP is the most bearish of the three after losing nearly 2% of its value in the past 24 hours. At the moment, XRP is trading well below its 100-day simple moving average and exponential moving average at 1.20 and 1.14, respectively.

However, if the market picks up and the price rises, XRP could rally past its next resistance point at $1.05. The XRP/USD pair has found it tough to surpass the 1.05 mark over the past few days. In the case of an extended rally, XRP could attempt to reach $1.1 during the weekend.

The XTZ/USD 4-hour chart is also looking bearish, similar to the other two. If the market refused to pick up, XTZ could slip below $3.50 and lose its next support at $3.20. The cryptocurrency’s technical indicators are bearish at the moment, suggesting that a dip in price could happen soon.

However, if the market picks up, then Tezos could aim for its 100-day exponential moving average at $4.43 during the weekend. An extended rally could see XTZ soar to the $5.70, last seen before the market sell-off began.