Bitcoin is still trading below the $40k mark, but there are signs that the cryptocurrency could target the next resistance at $43k soon.

Bitcoin staged a rally this week following last week’s major crash. At its peak, the leading cryptocurrency was up by over 37% from its last week’s lowest level. However, the rally has stagnated, with Bitcoin unable to mount a move past the $40,000 region in the past 24 hours.

Despite that, the bullish trend in the market is still intact, with several analysts convinced that BTC could rally to $43k over the coming hours or days.

The BTC/USD 4-hour chart showed that the leading cryptocurrency staged an impressive recovery following a crash to a multi-month low last week. The pair soared and retested the huge resistant level at $40,000, rising above the 23.6% Fibonacci retracement region in the process.

The pair is also at the same level as the 25-day and 15-day exponential moving averages (EMA). The BTC/USD pair is currently forming an inverted head and shoulders pattern, indicating a bullish signal. The bullish flag pattern formed could also signal that the bulls will target the next resistance at $43,174. A further rally could see the BTC/USD pair test another major resistance level at $45,522. 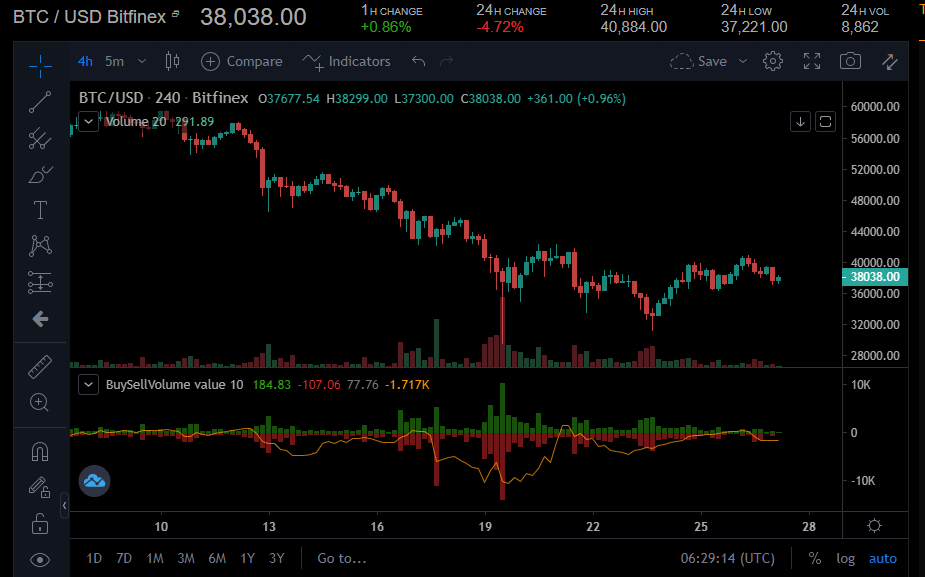 However, Bitcoin is trading above the $38,000 region at the moment. A dip below $36,000 will invalidate the bull signal and allow bears to regain control of the market. If there is an extended market sell-off, the BTC/USD could decline below $35,000 for the second time in two weeks. Bitcoin’s technical indicators are looking to break out from their bearish trend. Failure to do so could bring into sharp focus the losses recorded last week.