Cardano has become the fourth-largest cryptocurrency by market cap despite the current bearish cycle in the broader market.

The cryptocurrency market has been experiencing a large correction since last week, with Bitcoin currently trading around $35,000 per coin. Cardano (ADA) is also underperforming, having lost 39% of its value over the past week.

However, ADA has still managed to climb its way up to become the fourth-largest cryptocurrency by market cap, overtaking Binance Coin (BNB) in the process. The cryptocurrency maintains a trace of bullishness and could experience a positive trend in the coming hours.

Cardano has been achieving some impressive milestones, and this leaves some experts bullish about its price performance.

The ADA/USD 4-hour chart indicates that the cryptocurrency is slowly recovering. ADA is currently up by 5% over the past hour after efficiently absorbing the selling pressure. The cryptocurrency has maintained the support zone between $1 and $1.35, allowing it to reach the $1.40 region over the past few hours.

If ADA can maintain this momentum, it could soon cross the resistance level at $1.50. The technical indicators show that ADA has the potential to rise above the current bearish market. An extended bullish run could see ADA test the resistance levels at $1.66 and $1.80 in the coming hours or days. 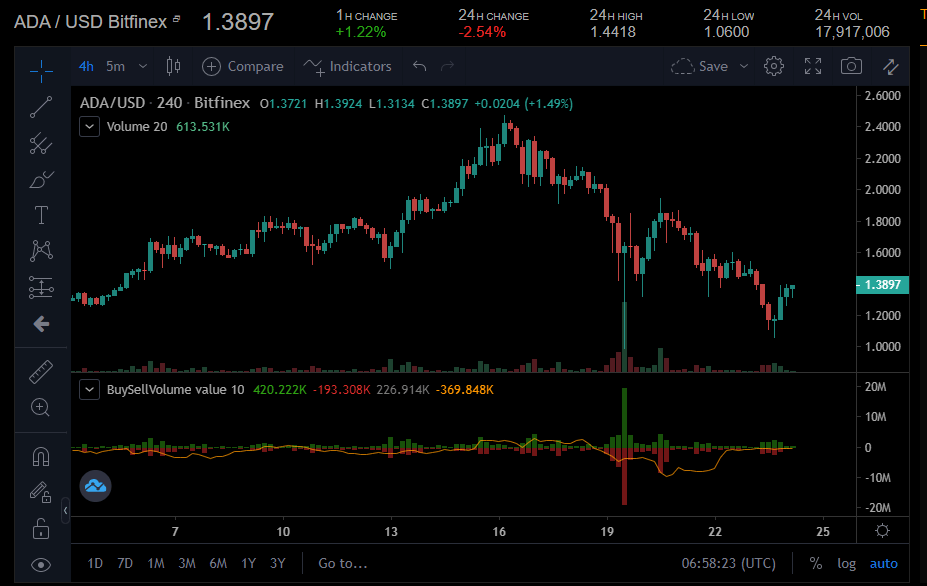 ADA’s 100-day simple moving average ($1.78) and exponential moving average ($1.66) are both in the red zone. Thus, implying that the bearish sentiment still in fact rules the ADA market. If ADA fails to mount any significant rise to break the above-mentioned resistance zones, it will allow sellers to creep into the market. This could expose the support zones at $1.35 and $1 again.

Further market sell-offs could see ADA drop below the $1 point for the first time in weeks. If that happens, ADA could probably lose its fourth position in the market.