The leading cryptocurrency suffered its worst daily drop in over 14 months yesterday, dropping to $30,000 on most cryptocurrency exchanges before slightly recovering some of its losses.

The general cryptocurrency market suffered a massive dump yesterday, with Bitcoin dropping below $40,000 and trading at $30,000 on most cryptocurrency exchanges.

The market could still see more selling if the negative sentiment grows. At the moment, the $50,000 level will provide a resistance level for Bitcoin as it was previously a support region for the leading cryptocurrency.

However, analysts believe that the prices could rise higher as it is needed to calm the market after such a massive sell-off, such as Michael Van de Poppe who claims the market will now consolidate for a while.

Most likely, especially after such a wick, we won’t come back to the prices of the actual low for #Bitcoin.

But most likely, we’ll also be consolidating for a while, on a higher level.

To make you bored.

And to make the market calm again.

The BTC/USD 4-hour chart shows a cryptocurrency that has suffered losses but is slowly recovering. After hitting a low of $30,000 24 hours ago, Bitcoin began consolidating, and its price rose to currently trade at around the $40,000 level. BTC/USD is currently struggling to surpass the $40k mark. If it successfully does that, then it could target its 30-day exponential moving average ($43,530). 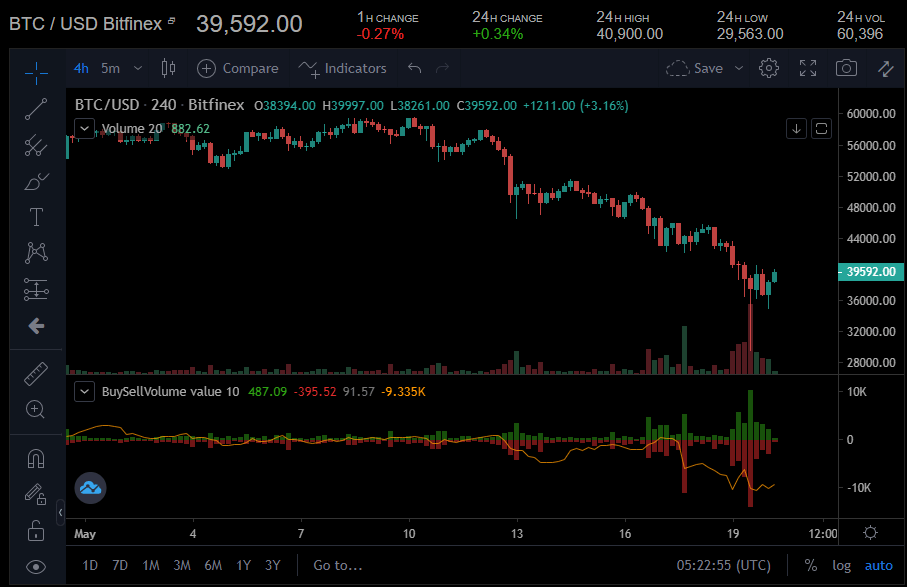 A rally past that level could set BTC up for a fresh attempt towards resistance at $46,808. However, with the current bearish environment, Bitcoin could find it hard to break past the $50k resistance level soon. The $50k psychological range will be a tough one for Bitcoin at the moment since it provided significant support in the past.

Bitcoin’s technical indicators suggest that the bearish trend might not be over. Its MACD and RSI are still in the bearish territory. Failure to mount a serious climb past the $40k region could see the sellers resume their market dominance. If that happens, Bitcoin could drop below $35k in the coming hours or days.