Bitcoin’s price has recovered above the 200EMA on the 4-hour chart, a key support zone likely to catalyse a fresh upside towards $60k

Bitcoin hit resistance around $59,982 on Coinbase on Tuesday, with the rejection resulting in a 10% decline that pushed prices to support near $53,500. The sell-off happened as stocks plummeted, with the cascade effect routing some top altcoins.

The past 24 hours have however seen a recovery process begin for Bitcoin. The flagship cryptocurrency’s value has increased by 4% against the US dollar to break above $57,000.  The upturn sees BTC price climb above the 200 exponential moving average on the 4-hour chart.

As a result, Bitcoin bulls are currently trying to break above the $57,500 supply zone, a scenario that could allow for a new rally in the short-term.

The 4-hour chart shows that Bitcoin has made a series of higher lows and lower highs since breaking upwards from lows of $47k on 25 April.

The price however broke lower from an ascending trend line support on 10 May, with another lower high made below the 200 EMA line ($56,353).

Intraday action has pushed the price back above the moving average to see bulls seek another leg up to the rising support line. 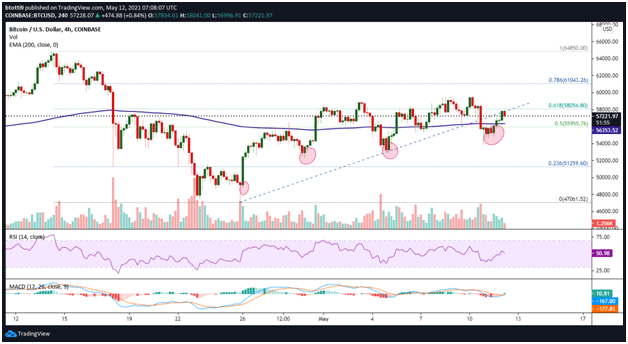 Technical indicators on the above chart favour a positive outlook for Bitcoin. The RSI has climbed above 50, while the MACD is suggesting a hidden bullish crossover with easing downward pressure.

A contrary perspective for BTC/USD might materialise if the price makes another lower high below the 200EMA line. In this case, the immediate support zone is around $54,000. The breakdown levels of $53,300 and $52,700 offer support if sentiment turns south, with the main anchor likely at the 23.6% Fib level around $51,259.