Is There More to Mark Zuckerberg’s Bitcoin Goat Post?

Is There More to Mark Zuckerberg’s Bitcoin Goat Post?

Yesterday, Facebook CEO Mark Zuckerberg, shared a photo of his pet goats on Facebook Perhaps the most eye-catching details of the post were the pets’ names that have sparked reactions from the crypto community. One of the pet goats is named ‘Bitcoin,’ and the other is called ‘Max.’ 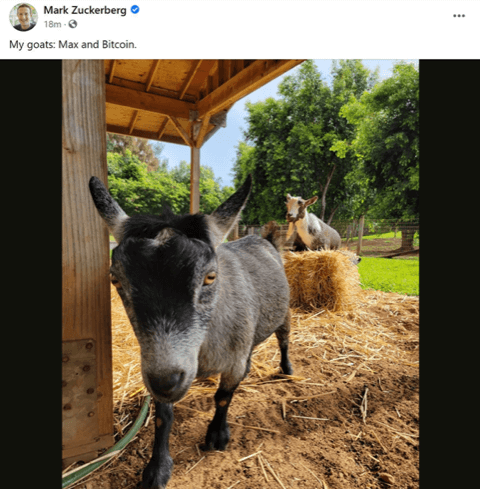 Crypto Twitter has since tried to analyse the post for hidden meanings and understand why the Facebook co-founder named his pets that way. Many have reacted with excitement across the crypto space, speculating that the pet names have a ‘hidden’ meaning.

Bitcoin trader LilMoonLambo shared his perceptive, saying, “You have two weeks to accumulate as much $BTC as you can before Mark Zuckerberg announces that he and Facebook have purchased Bitcoin during their annual shareholder’s meeting…The pump will be glorious.”

Morgan Creek Digital founder Anthony Pompliano posted on Twitter, “Is Mark Zuckerberg telling us he is a bitcoin maximalist with the names of his goats?”

Tech investor Kevin Rooke posted saying, “Mark Zuckerberg has a goat named Bitcoin and a company with $20 billion of cash on their balance sheet. You do the math.”

“If you thought the Elon Musk and Tesla pump was something, get ready for the Mark Zuckerberg Facebook pump!”

Former Goldman Sachs banker and SkyBridge founder Anthony Scaramucci appeared to extend a welcome to Zuckerberg with his remarks.

“I knew Mark Zuckerberg would become a Bitcoin-er when he hired David Marcus from PayPal to run Facebook’s crypto business. It’s been a long and winding road, but welcome to #Bitcoin. Great job Zuck and David. Excited for what comes next,” he said.

Robert Leshner, chief executive of the DeFi protocol Compound, was cynical of the excitement and jokingly remarked that the Facebook founder would have Bitcoin and Max for dinner. Leshner’s response is likely a reference to an incident that first emerged in 2019.

It is reported that Zuckerberg slaughtered one of the goats from his farm and prepared it for a dinner event with Twitter CEO Jack Dorsey. Dorsey revealed this in an interview with Rolling Stone adding that Zuck had set a goal of only eating meat he had killed himself.

Even though many have interpreted the post to mean something more, there’s a possibility that Zuckerberg has his tongue in his cheek. It was rumoured that his social platform would disclose its BTC holdings in its Q1 earnings report, but the April 28 report didn’t show any held crypto assets.