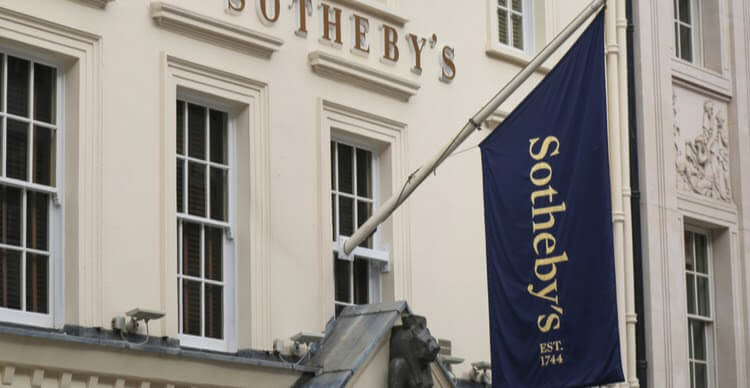 Auction house Sotheby’s announced today that for the first time ever, a piece of art can be bought at one of its auctions using cryptocurrency. Working in partnership with cryptocurrency exchange CoinBase, Southeby’s said that the artwork by Banksy called Love Is In The Air, will be auctioned on May 12 in New York, and that bids can be placed in either Bitcoin or Ether.

Sotheby’s has been a pioneer in its acceptance of digital currencies for its artworks. It also auctioned works by crypto designer-native artist Pak as an NFT. The three-day sale attracted more than 3,000 buyers, with the collection finally going under the hammer for $16.8 million.

Stefan Pepe, Sotheby’s Chief Technology Officer, said: “With the growing adoption of digital art and NFTs, along with our increased focus on digital innovation, we’ve seen an increasing appetite among collectors for more seamless payment options when doing business with Sotheby’s. Leveraging the trusted exchange Coinbase is a natural progression and is in line with our dedication to enhancing our client buying experience and developing new ways to expand our client base by meeting them where they are.”

When asked in an interview with CNBC whether the sale price would be converted back into dollars, Sotheby’s CEO Charles Stewart said “We have an agreement with the owner of the painting, the consigner of the painting, so that will ultimately be up to them. Part of the partnership with Coinbase gives us not only the ability to process the payment, but that possibility as well.”

One possible point of contention for such sales are the tax implications, as the US Inland Revenue Service considers Bitcoins to be property, so spending them is classified as if you were selling them. This opens the buyer up to capital gains tax if the bitcoin’s value is now higher than it was when it was purchased.

The painting, depicting a masked man hurling a bunch of flowers, is estimated to sell for between three and five million dollars.