Dogecoin has continued its amazing rally this year and could now be heading for a new all-time high above $0.70

Dogecoin was the best-performing cryptocurrency amongst the top ten in the market yesterday, after rallying past $0.50. In the process, Dogecoin became the fourth-largest cryptocurrency by market cap, surpassing XRP and USDT.

After setting strong support close to $0.60, Dogecoin could rally higher in the coming hours and days and set a new all-time high along the way. Analysts and cryptocurrency experts are optimistic that Dogecoin’s current rally could see it reach $1 soon, such as Lil Mook.

The DOGE/USD 4-hour chart is one of the most bullish charts amongst the top ten cryptocurrencies. It has been rallying for the past few years, and its technical indicators suggest that the rally could extend further. 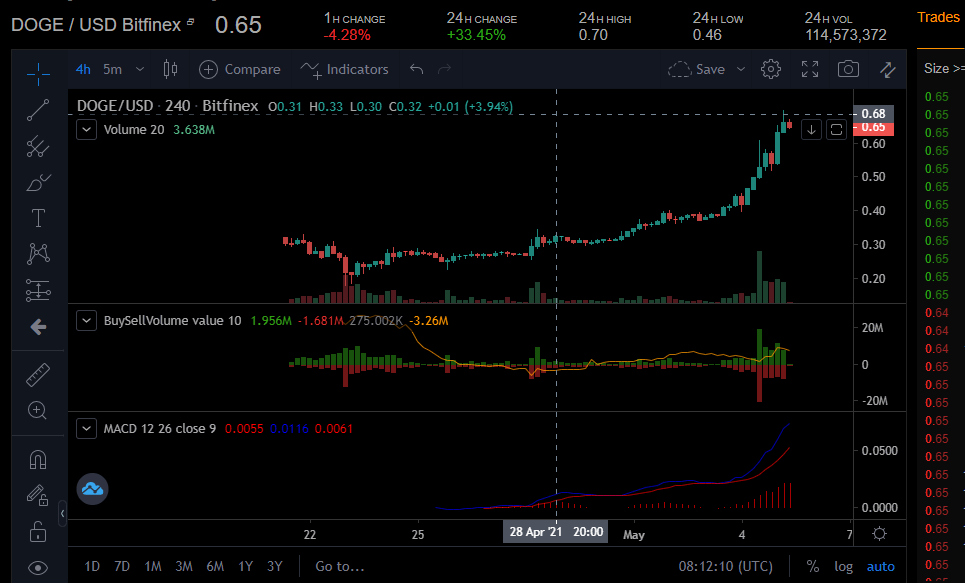 If the current trend continues, DOGE could break past the $0.71 resistance, setting a new all-time high in the process. In the event of an extended rally, DOGE could make a run for the next major resistance point at $0.90 and head towards the $1 mark. Its technical indicators suggest that could happen. DOGE’s MACD line is in a very bullish zone, and an RSI of 82.52 shows that the cryptocurrency is overbought. DOGE’s 100-day simple moving average currently stands at $0.335, which is half its current trading price.

However, if the bulls relinquish control of the market, the DOGE/USD pair could slip below $0.60, and they have to defend the $0.52 support level. Barring an extended sell-off, DOGE should comfortably defend its $0.4 major support point.

Dogecoin has been rallying in recent weeks. However, it’s listing on Gemini and eToro are major catalysts behind its current run. Gemini listed Doge yesterday, allowing traders to access it via a wide range of fiat currencies, including USD, GBP, EUR, CAD, AUD, HKD and SGD.