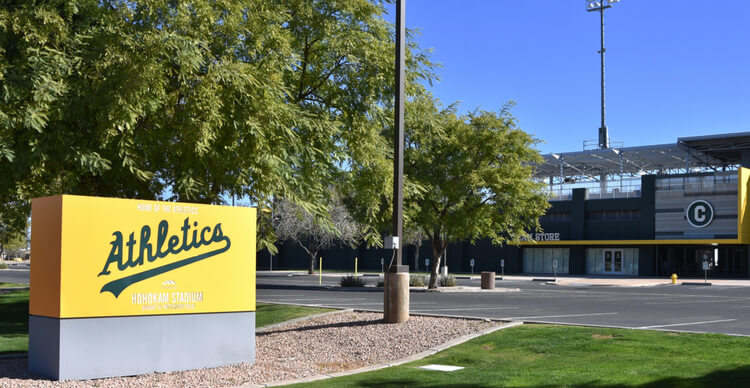 Major League Baseball team Oakland A. is now selling two-pack tickets for its next series for Dogecoin

The Oakland Athletics are offering tickets in exchange for Dogecoin for their upcoming series against the Toronto Blue Jays at the RingCentral Coliseum. The two plaza infield tickets are going for 100 DOGE, with the Dogecoin-themed special offer — which began yesterday — to run until Thursday. The Major League Baseball team already confirmed it had sold some tickets, making this the first transaction of its kind in the history of the sport.

The pair of tickets typically costs around $80 when the payment is made in the US dollar. DOGE is, as of writing, changing hands at around $0.445 (up 14% in the last 24 hours) which means fans will get some discount by buying the tickets using the meme crypto coin.

“Join us at the ballpark as the Blue Jays roll into town! Two-seat pods in the Plaza Infield are available for 100 Dogecoin for the series,” the team posted.

Major League Baseball noted in its press release that the Athletics team was the first team in the league to accept crypto payments.

Fans interested in paying in DOGE will be required to fill out a form before completing the transaction via the payment service provider BitPay. The tickets will then be issued using the MLB Ballpark App.

The move comes two months after the Dallas Mavericks, which competes in the National Basketball Association, announced it was accepting DOGE payments for its merchandise and tickets. Mavericks’ owner Mark Cuban revealed that the team had earned a total of $122,000 in DOGE from the sales as of mid-April.

Dogecoin has seen significant growth in the last few weeks. Its total market capital has risen by nearly 17% in the last 24 hours to $59 billion according to Coinmarketcap. The crypto occupies fifth place after recently surpassing the stable coin Tether.

Doge’s market capital is also higher than that of several large-cap companies in the S&P 500 list including the US automaker Ford and social platform Twitter.  Qiao Wang, a former entrepreneur at Messari, estimates that if Dogecoin was in the S&P 500, it would rank among the top 150.