Bitcoin Price Analysis: Could We See a Drop Below $53k?

Bitcoin Price Analysis: Could We See a Drop Below $53k?

Bitcoin performed excellently this week to erase most of last week’s losses. However, the leading cryptocurrency seems to have lost steam, having stagnated at the $54k range for the past few days.

The cryptocurrency’s technical indicators suggest a consolidation period is here as bulls find it hard to push towards the $60k mark again. Hence, Bitcoin risks dropping below $53k after suffering minor losses over the past 24 hours.

Analyst Michaël van de Poppe believes a period of consolidation is good for Bitcoin and is a part of the bull cycle.

In general, I think #Bitcoin will consolidate for a substantial period of time.

That’s essentially quite good, as healthy consolidative periods are part of a bull cycle.

You can’t throw six all the time.

Bitcoin has slipped back into bearish mode again over the past 24 hours. It is currently down by 2% in the past day, and its technical indicators suggest a dip is coming again. A look at the BTC/USD 4-hour chart shows the cryptocurrency is trading below its 100-day simple moving average ($56,322). The bulls struggling to reach the 100-day SMA shows that the bears haven’t relinquished control of the market. 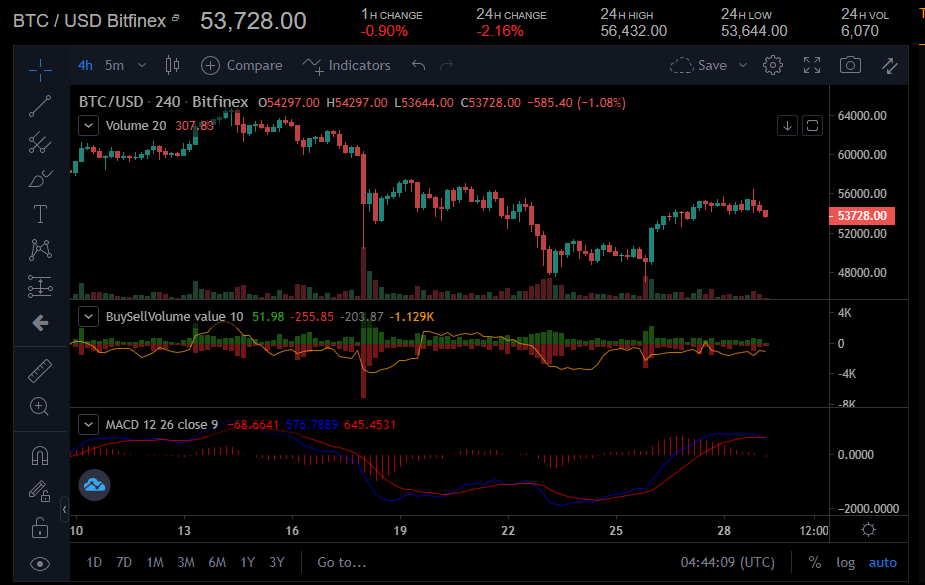 The MACD line is slightly in the bullish zone, which is understandable considering Bitcoin has had a net positive performance over the past week. However, if the current trend continues, Bitcoin will need to defend the $52,786 support to avoid further losses. An extended bearish period could see the BTC/USD pair slip towards $47k again. Regardless, Bitcoin’s strong $44,850 and $43,016 support zones will be challenging for the bears to breach any time soon.

However, in the case of a breakout, Bitcoin could attempt to surpass resistance at $57,558 and head towards $60k again. While technical indicators suggest it is unlikely at the moment, Bitcoin could see an extended rally push it towards a new all-time high above $64k.