MATIC price reached a new all-time high of $0.91 but currently trades near $0.70

Polygon (MATIC) has seen its price against the US dollar rise to a new all-time high of $0.91 following its 54 percent gains on 27 April. The cryptocurrency has shaved off some of the gains as traders seeking short-term profits look to sell.

MATIC/USD is changing hands at around $0.72, down from its intraday highs above $0.90. It is possible MATIC will face increased sell-off pressure, especially if the much-anticipated altseason fails to tick up as Bitcoin struggles.

Despite the losses, the cryptocurrency remains more than 20% up on the day as of writing. Weekly gains currently stand at 112 percent.

According to analytics platform Santiment, Polygon’s on-chain metrics are strong to suggest further gains are possible.

The Polkadot rival has also seen a remarkable increase in the total value locked (TVL) in the protocol. DeFi Pulse shows that $1.19 billion worth of asset value is currently locked in the payments protocol, with that figure including an increase of over 19% in the past 24 hours. MATIC is currently the 15th largest DeFi project by TVL.

The MATIC/USD pair saw parabolic action after breaking above the upper boundary of a parallel channel on 26 April. The breakout also resulted from a cup and handle pattern, with a new high formed when bulls broke above the previous resistance level at $0.53.

The 54 percent green candle took prices into discovery mode before the upside began to fade. The daily MACD and RSI suggest buyers are in command, which could aid a fresh punt on the upside.

If price turns higher, the main target is $1.00, with a potential run towards $1.50 if the wider altcoin market comes to life in the short term. 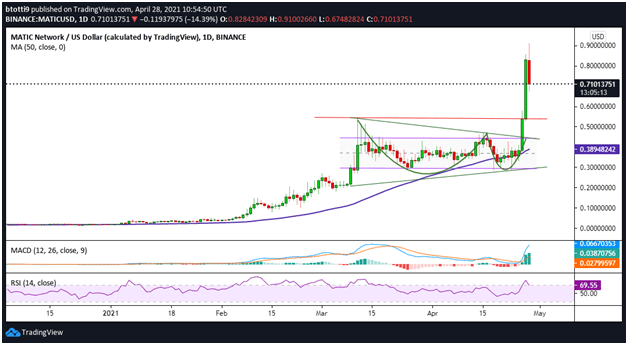 Although the price outlook remains bullish, an extended downside correction could spell danger for bulls.