The leading cryptocurrency is still struggling below its 50-day simple moving average, unable to shake off the weekend’s losses

The BTC/USD pair has faced headwinds in recent days. The leading cryptocurrency by market cap lost over 10% of its value this past weekend and has struggled to regain upward momentum since then.

The selloff sparked a breakdown of the bullish trend that saw BTC surge higher throughout most of this year. This weekend’s selloff pushed Bitcoin below its 50-day simple moving average, and it has been struggling to resume an upward trend.

However, according to analyst Michaël van de Poppe, the bull cycle that began nearly a year ago could continue and lead to massive profits in the coming months. He predicts Bitcoin heading towards $500,000 before the end of this bull cycle.

This entire cycle is going to be massive, still.

Watched some interviews with @RaoulGMI today.

Although Bitcoin may rally in the long run, it is struggling at the moment, with the BTC/USD 4-hour chart indicating that the leading cryptocurrency may fail to break above $55,477. 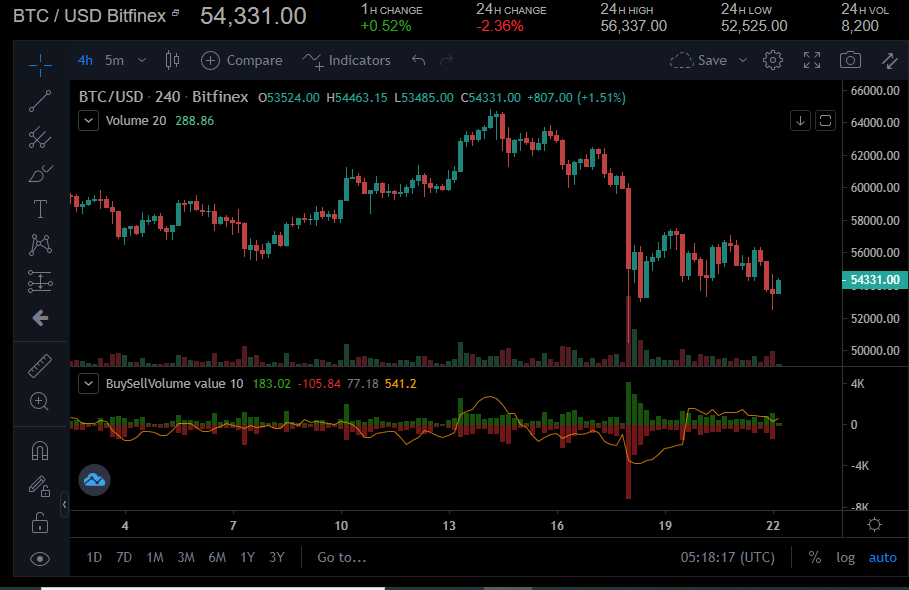 Today it is still trading below its 50-day SMA ($58,796.94). Any potential breakout could face resistance from bearish divergence on the relative strength index, with the RSI currently reading 41.68. However, a rally past the resistance at $55,477 could set Bitcoin up towards the $57k region. An extended rally could see Bitcoin surpass its 50-day SMA and attempt the $60k level again.

With the bears controlling the market for the best part of the week, Bitcoin could struggle to defend its support at $53,329. Failure to defend this position could bring the $50k region into focus, wiping out most of the gains accrued over the past month.

At the moment, the negative trend seems to have the upper hand in the market, with Bitcoin’s MACD lying deeply in bearish territory.