The general cryptocurrency market recorded massive losses over the past 24 hours. Bitcoin lost more than 3% in the last 24 hours, bringing its total loss in seven days to almost 10%. Ether, XRP, Binance Coin (BNB) and XRP are all in the red following a weekend of massive sell-offs and further declines yesterday. The only leading cryptocurrency trading positively is Dogecoin, which is up by 25% in 24 hours and 451% over the past seven days.

The market’s performance rubbed off on Polkadot as it lost more than 11% of its value against the US dollar over the past 24 hours. Polkadot dropped from the $38 region to trade at its current level at $33. If the trend continues, DOT could soon trade below the $30 mark.

The DOT/USD 4-hour chart is currently looking bearish. Following a massive sell-off last weekend, DOT recovered from the $32 region yesterday to reach a daily high of $38.72. However, the bulls couldn’t sustain the rally and soon lost momentum, allowing bears to take control of the market.

The DOT/USD pair broke the major support points at 36.66 and 33.76 over the past 24 hours. If the current trend continues, DOT could decline towards its 100-day simple moving average ($30.1757). An extended bearish trend could see DOT trade below $30 for the first time since February. 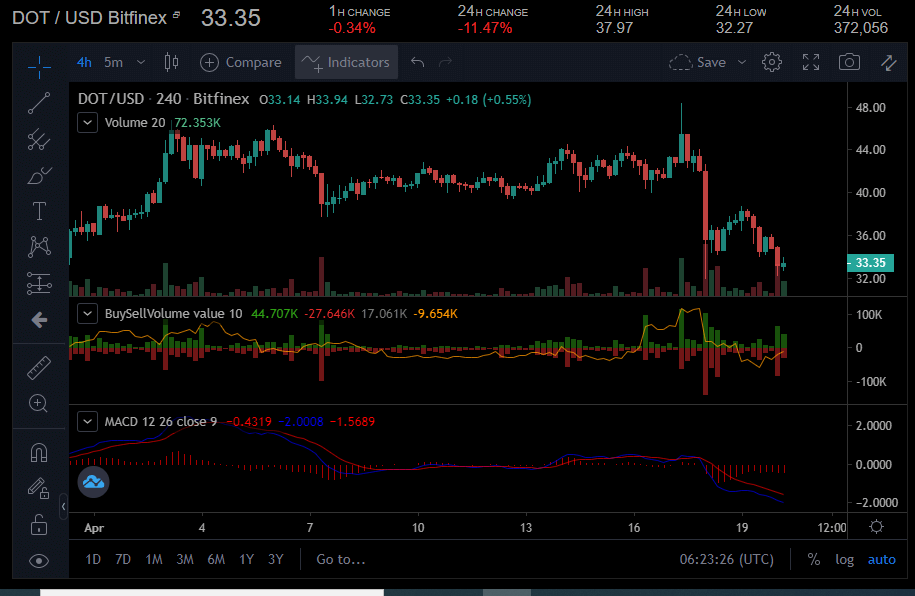 The MACD line is in bearish territory, indicating that there could be further sell-off in the next few hours. DOT’s RSI of 37.68 is neutral but leaning more towards a bearish trend. If DOT fails to defend its support point at 31.80, the cryptocurrency is likely to record further losses.

However, if the market reverses, DOT would be looking to make a run for the resistance point at 35.82. To do so, Polkadot would need help from the broader cryptocurrency market. An extended rally could see it regain its recent losses and attempt to break past the $40 mark. However, much of the optimism depends on the performance of the general market.