The broader cryptocurrency market sustained massive losses this weekend, with Bitcoin losing more than 10% of its value within an hour. Bitcoin’s price dropped to the $52k region before slowly embarking on a recovery.

Bitcoin’s performance, as expected, had a knock-on effect on the rest of the cryptocurrency market, with Theta dropping from the $15 region to trade below $10. However, the market is slowly recovering, and the THETA/USDT pair is targeting a surge above $13.

THETA suffered massive losses over the weekend but began its upwards recovery in the past few hours. At the time of this report, THETA is up by roughly 12% against USDT over the past 24 hours as it targets its previous high of $15.93.

A look at the THETA/USDT 4-hour chart shows that the indicators are moving towards a bullish sentiment. THETA is trading way above its 100-day simple moving average at $6.119 while its RSI is above 50, indicating that the bulls could continue their upward climb. 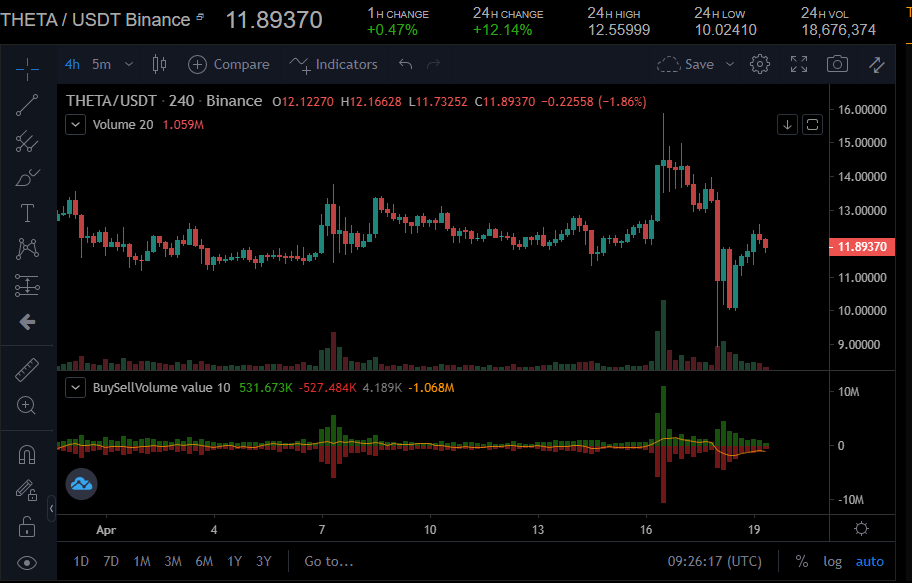 The MACD line is still in bearish territory, most likely due to the massive losses sustained during the weekend. However, if the THETA/USDT pair can establish strong support at the $11.40 mark, then it could allow it to rally higher and attempt to reach $13 before the end of the day.

An extended rally could see THETA surpass the $13.23 resistance point and heads towards $15. The cryptocurrency will need help from the broader market if it is to break past the next few resistance points and reach its high of $15.93.

However, failure to keep up with the recent recovery could see THETA decline, and the bulls would have to defend strong support at $9.9.