Ethereum struggling to break resistance at $2,200

Ethereum struggling to break resistance at $2,200

Ethereum is attempting to regain all-time high levels but continues to struggle against a major resistance point at $2,200

Ethereum is up by 0.27% against the US Dollar over the last 24 hours, shaking off its minor losses yesterday. However, the second-largest cryptocurrency by market cap is struggling to break a major resistance point at $2,200.

Ether didn’t stay down long as a reversal saw it establish strong support at $2,121. The cryptocurrency begins Tuesday on a positive note and could attempt to break past the $2,200 level again.

A look at the ETH/USD 4-hour chart showed that the cryptocurrency had already broken past the resistance point at $2,147. At the time of writing, ETH is trading at $2,160, and support from the broader market can help the cryptocurrency break back through to $2,190 levels. 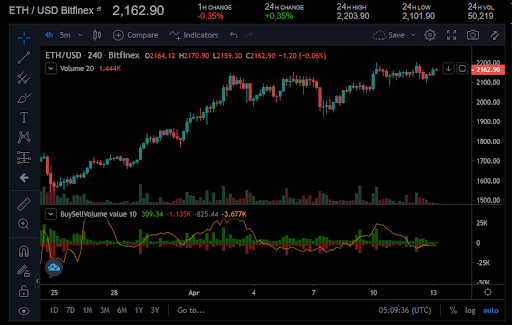 If there is an extended rally, ETH could break the $2,200 barrier and test resistance at $2,300 before a pullback. After $2,200, the second major resistance level sits at $2,243. However, failure to break through the $2,190 region could allow the bears to take control and push the price to $2,147. An extended bearish trend could bring the first top support level at $2,094 into play.

Unless the market is extremely bearish, ETH should continue to steer clear of sub-$2,050 levels. Looking at its technical indicators, ETH is trading way above its 100-day simple moving average ($1,997.99). Its RSI is in a neutral position while the MACD line suggests a bullish trend is in play.