Weekly Report: Grayscale to convert its Trust into ETF product

Weekly Report: Grayscale to convert its Trust into ETF product 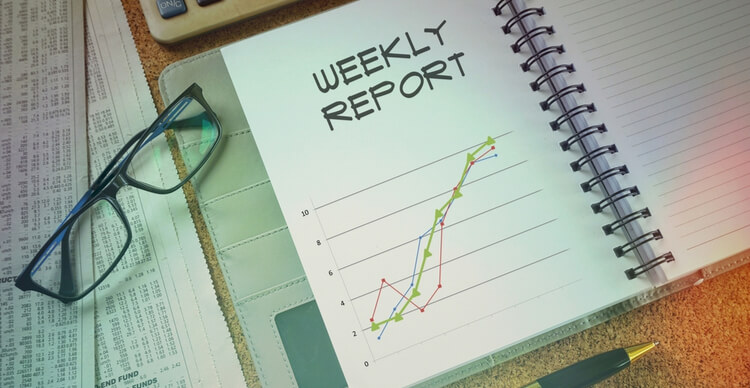 Ether started the month with great upward momentum that saw its price steadily rise towards the end of last week. The continued uptrend drove ETH prices higher over the weekend, notching a new high of around $2,142 on Saturday as per data from Coinmarketcap. The token retreated to about $2,060 on Sunday and changed hands at this range on Monday.

ETH prices once again surged late on Monday, retesting $2,130 early on Tuesday. The token traded at this rate until Wednesday, when a massive dip saw the figure drop below $2k. It has since bounced back above the $2k level and is currently trading at $2,068.34.

Bitcoin tested $60k on Saturday before shedding over $1k of its gains in less than 24 hours. It started the week trading around $59k and maintained this range until Wednesday. A sharp plunge saw its price drop to $55k on Wednesday, but it managed to climb to $56k before the end of the day. The crypto coin is currently on an uptrend looking to close in on $60k after several past failed attempts.

Grayscale set to convert its Bitcoin Trust into a Bitcoin ETF

The US-based digital assets investment firm Grayscale announced earlier this week that it was still dedicated to its mission of developing exchange-traded fund products. The company explained that it was planning to convert its leading Grayscale Bitcoin Trust (GBTC) into a Bitcoin ETF investment product.

GBTC is the largest Bitcoin investment product currently available on the market, constituting $34 billion of AUM. The company also shared its history and growth over the years in the blog post detailing its intentions to launch an ETF. Grayscale wrote that converting its Trust products into ETFs was always the plan from the onset.

The company disclosed that it had been monitoring the possibility of introducing an ETF product for a while to determine when it was permissible to proceed. According to the blog post, Grayscale filed for a Bitcoin ETF back in 2016 and engaged with the US Securities and Exchange Commission on the subject in 2017 before withdrawing the application.

MicroStrategy on Monday announced it had completed another Bitcoin purchase worth $15 million. Following this purchase, the business intelligence firm has now added 253 coins to its stash of 91,326 units taking the total holdings to 91,579 bitcoins. The investment comes barely a month after the company wrapped up another Bitcoin acquisition involving the same amount.

The company, led by Bitcoin advocate Michael Saylor, has now completed an overwhelming $30 million BTC purchase in the space of three weeks. According to SEC filings, MicroStrategy bought each coin at a unit price of $59,339.

Since making the first purchase at the end of Q3 2020, the intelligence firm has spent approximately $2.23 billion in Bitcoin. The average price of each Bitcoin held in its reserve currently stands at $24,311. It is worth noting that at today’s BTC price ($58k), the holdings translate to over $5 billion – more than double the amount injected.

Elsewhere, Fidelity Investment, Coinbase, and Square have joined hands to form an alliance to promote the positive side of crypto. According to a post from The Wall Street Journal, the trade group, which also features Paradigm, is called The Crypto Council for Innovation.

The council will create a good crypto image in the eyes of regulators and policymakers. It will also help promote projects and cultivate innovations in the space. Crypto regulations in the US are murky, and the group looks to introduce a bit of clarity while defining how digital assets should be regulated.

As reported by the WSJ, the group has a target mission of illustrating the “transformational promise of crypto and communicating its benefits to policymakers, regulators, and people around the globe.” The council will have a board featuring a member from each of the involved companies and an executive team.

The Ethereum-based Enjin token received a massive boost this week following the Coinbase Pro support announcement. The leading exchange announced on Wednesday that it would make the token available for trading to its professional customers. Enjin has consequently seen significant upward momentum, with its price surging sharply to surpass the previous ATH slightly above $3.

It closed the day on Wednesday with a price figure north of $2.80 before crossing the $3 mark yesterday. The uptrend saw Enjin wrap up Thursday sitting above $3.20. The token’s price has continued rising and set a new all-time high of $3.65 earlier today. It is currently trading at $3.61, having gained more than 26% in the last 24 hours.

Mid-week, PayPal CEO, Peter Thiel, made claims that China could use the flagship crypto as a weapon to undermine the power of the US dollar. This, in his opinion, would give China an upper hand in matters of the world economy. The venture capitalist argued that Bitcoin should be regarded as a financial weapon available to China.

He implied that the crypto asset is a threat to central bank-issued money like the US dollar. Thiel suggested that China could turn to the Euro to vitiate the US dollar and subvert the position of the US economy-wise. The PayPal chief also laced into US tech companies like Google and Apple for their association with China.