XRP has established strong support at the $0.89 mark, giving it the opportunity to rally above the dollar for the second time in 24 hours.

XRP traded above the dollar earlier this week for the first time in three years. It is one of the best performing cryptocurrencies this week and maintained its position, going up 3.9% against the US Dollar over the past 24 hours.

XRP became the fifth largest cryptocurrency by market cap after passing Cardano (ADA), with a market cap above $44 billion.

The XRP/USD pair has been trading above $1 for the past few days, after rising by 72% last week. However, it slipped below the dollar yesterday, dropping to $0.89. If the bulls regain control, we can expect them to push back to regain parity with the dollar once more. 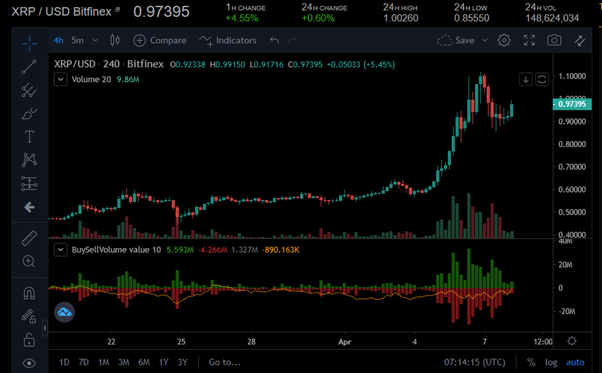 The move towards $1.10 could soon happen as a positively-inclined RSI, and a MACD reading above the signal line, indicates that the bulls still have a say in the market.

In a scenario where the bears take control,  XRP could decline to the 20-day SMA point ($0.90439). If that happens, XRP could face further decline towards $0.63, undoing the gains it has accumulated over the past week.

Peter Brandt is bullish on XRP

Veteran commodity trader Peter Brandt predicts a positive outlook for the XRP/BTC pair. He tweeted that “This is called a compound fulcrum and can be a quite powerful buy signal.”

The XRP/BTC pair formed the extremely rare compound fulcrum pattern, usually used by point and figure chartists. According to Brandt, the pattern could be a powerful XRP buy signal.

Ripple is also gaining ground in its legal battle with the SEC. The chief technology officer (CTO) of Ripple, David Schwartz, stated that all the evidence suggests that BTC and XRP are similar despite the SEC’s allegations.