The leading cryptocurrency has struggled to reach the $60k point in the last few days, with bulls failing to capitalise on the general market rally before the bears entered.

Bitcoin price continues its struggle after slipping below the $58k mark earlier today. The bears appear to control the market and could push the BTC/USD price lower over the coming hours. The pair has experienced heavy selling pressure over the past 24 hours, with its price down by 5% after reaching a daily high of $59,000 yesterday.

The bulls have to take advantage of the altcoins rally if they are to push Bitcoin’s price above $60k for the first time in five days. XRP remains the best-performer amongst the leading cryptocurrencies, up by 17% over the past 24 hours. The XRP/USD pair reached the $1 mark for the first time in three years.

Binance Coin (BNB), Litecoin (LTC) and Chainlink (LINK) are some of the other top gainers in the market.

Bitcoin is in a bearish trend, as evident from its 4-hour chart. The BTC/USD 4-hour chart shows that the leading cryptocurrency struggles to gain momentum and could drop record additional losses over the next few hours if the bulls don’t take charge.

If the current trend continues, then the BTC/USD pair could drop to the 100-day Simple Moving Average point ($56,779.06). Bitcoin has established strong support at the $56k mark, and bears have struggled to take the price down below that level in recent days. However, if the price drops below the next psychological support at $56,979, then the bears could draw it lower, below $55k. 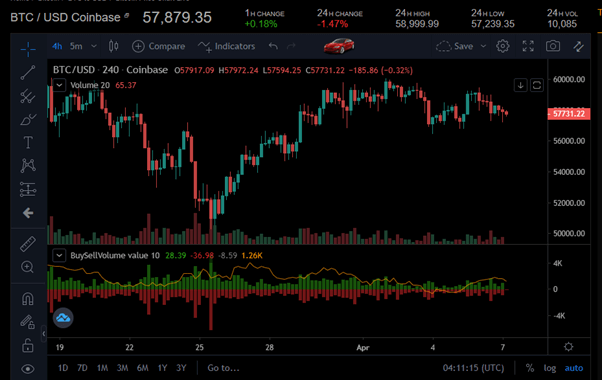 However, if the trend reverses, Bitcoin could surpass the next barrier at $ 58,339.49, allowing it to attempt the $60k resistance again. The MACD shows BTC is clearly in a bearish situation but not too deep below the margin. RSI for Bitcoin (41.52) indicates that the market is neutral, leaving it open for either the bulls or the bears to retain control.