If MIOTA maintains this current trend, it could reach the $2 level, making it the first time it would be trading at that price since 2018.

A look at the MIOTA/USD 4-hour chart shows that the pair is in a bullish mode. Currently, the pair is trading above its 100-day simple moving average at $1.5152. After reaching a monthly high of $1.8572 yesterday, MIOTA lost steam and declined to $1.6661.

The bulls didn’t allow the price to crash lower as they quickly regained control and pushed MIOTA back to the $1.80 mark. Having established strong support at $1.68, MIOTA is attempting to break past the next resistant point at $1.88. If that happens, MIOTA/USD is primed to break past the $2 mark for the first time since 6 May 2018. 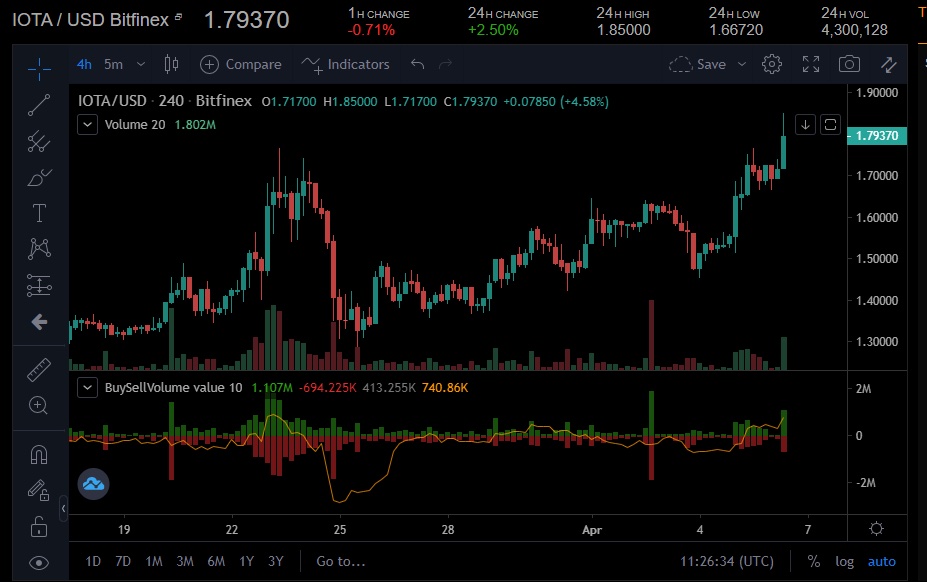 However, failure to surpass the next resistance level could see the price crash to the 20-day SMA at $1.6182. This could lead to further decline below the $1.5 mark. Currently, MIOTA’s RSI shows that the cryptocurrency is overbought. Thus, indicating that it is on a bullish run. Its MACD is also in the positive region, cementing the fact that bulls have a tight grip on the market.

The partnership is great news for IOTA, and its cryptocurrency has been on an extended rally since then.